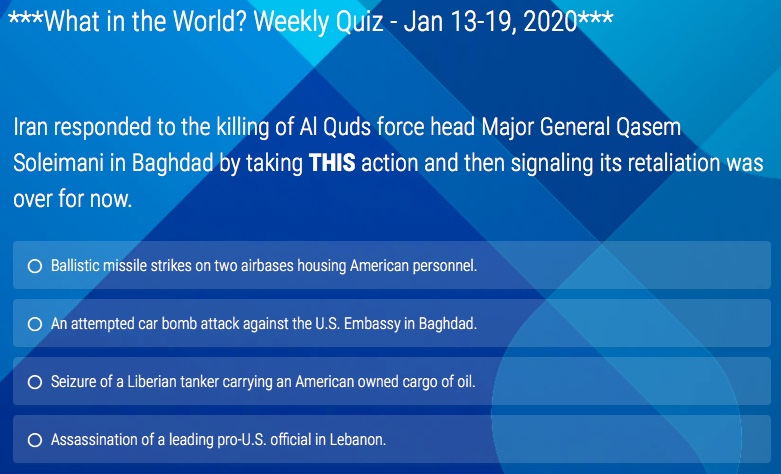 *** Link to Quiz***
Keep up with global current events by following the World Affairs Council on Twitter @TNWAC. #TNWACquiz

If you’re a weekly winner you’ll be entered for the monthly prize drawing but you must be a TNWAC member to win.  TNWAC.org/join

Prisoners of Geography: Ten Maps That Explain Everything About the World

In this New York Times bestseller, an award-winning journalist uses ten maps of crucial regions to explain the geo-political strategies of the world powers—“fans of geography, history, and politics (and maps) will be enthralled” (Fort Worth Star-Telegram).

Maps have a mysterious hold over us. Whether ancient, crumbling parchments or generated by Google, maps tell us things we want to know, not only about our current location or where we are going but about the world in general. And yet, when it comes to geo-politics, much of what we are told is generated by analysts and other experts who have neglected to refer to a map of the place in question.

All leaders of nations are constrained by geography. In “one of the best books about geopolitics” (The Evening Standard), now updated to include 2016 geopolitical developments, journalist Tim Marshall examines Russia, China, the US, Latin America, the Middle East, Africa, Europe, Japan, Korea, and Greenland and the Arctic—their weather, seas, mountains, rivers, deserts, and borders—to provide a context often missing from our political reportage: how the physical characteristics of these countries affect their strengths and vulnerabilities and the decisions made by their leaders.

Offering “a fresh way of looking at maps” (The New York Times Book Review), Marshall explains the complex geo-political strategies that shape the globe. Why is Putin so obsessed with Crimea? Why was the US destined to become a global superpower? Why does China’s power base continue to expand? Why is Tibet destined to lose its autonomy? Why will Europe never be united? The answers are geographical. “In an ever more complex, chaotic, and interlinked world, Prisoners of Geography is a concise and useful primer on geopolitics” (Newsweek) and a critical guide to one of the major determining factors in world affairs.

WHAT IN THE WORLD QUIZ

1. President Trump ordered the killing of Major General Qasem Soleimani on Thursday. Soleimani was the head of this organization.

A. The Quds Force
B. The Iranian Army
C. The Popular Mobilization Forces
D. Hezbollah

2. The Iranian Quds Force, or Jerusalem Force, is part of the Islamic Revolutionary Guard Corps (IRGC), a combined arms force – ground, navy, and air forces, special forces, intelligence and missiles. Who is the new commander of the Quds Force following the killing of Major General Qasem Soleimani.

3. An international coalition led by the United States in Iraq and Syria announced cessation of operations against THIS group as a result of Iran-backed militias’ attacks against Americans, with a spokesman using the Arabic name for the group in a statement saying, “We remain ready to return our full attention and efforts back to our shared goal of ensuring the lasting defeat of Daesh.”

4. What country was President Trump referring to when he spoke to reporters on Air Force One on Sunday and said, “”we will charge them sanctions like they’ve never seen before, ever. It’ll make Iranian sanctions look somewhat tame.”

5. A consequence of the US-Iran crisis is Tehran’s abandonment on limits for enrichment of uranium, a key component of THIS nuclear agreement between Iran and the P5+1 group (US, UK, France, Russia, China, Germany and the EU).

6. The government of Venezuelan President Nicolas Maduro physically blocked opposition leaders from parliament as a new head of Congress was elected, replacing THIS leader who was recognized by the United States as the legitimate head of state last January.

7. Masked men attacked student protestors at Jawaharlal Nehru University as demonstrations continued in India against Prime Minister Modi’s citizenship law criticized as religious discrimination. The law seen by observers as one more sectarian action by the Indian government dominated by followers of this religion.

8. President Trump spoke by phone with this leader last week to receive thanks for intelligence said to be “information the United States provided that helped foil a potential holiday terrorist attack,” according to the White House.

9. Vice Premier Liu He of China will travel to Washington for a January 13th meeting with U.S. officials for this purpose.

A. Deliver a pair of young pandas to the Washington National Zoo.
B. Sign Phase I of a trade deal with the United States.
C. Lead Chinese delegation observing the impeachment trial of President Trump.
D. Open talks on Sino-American cooperation in a manned mission to Mars.

Correct Response: B. Sign Phase I of a trade deal with the United States.
https://www.reuters.com/article/us-usa-trade-china/chinese-delegation-plans-to-travel-to-washington-to-sign-trade-deal-scmp-idUSKBN1Z40K5

10. Rains provided brief relief in THIS country battling catastrophic brush fires that have led to a national emergency. The nationwide fires have been worsened by record high temperatures and months of drought.

SUPPORT OF TNWAC’S EDUCATION OUTREACH
THANKS TO BASS BERRY + SIMS

THANKS TO SOUTHWEST AIRLINES