The only rule is to use the ‘honor system.’  No answer Googling! 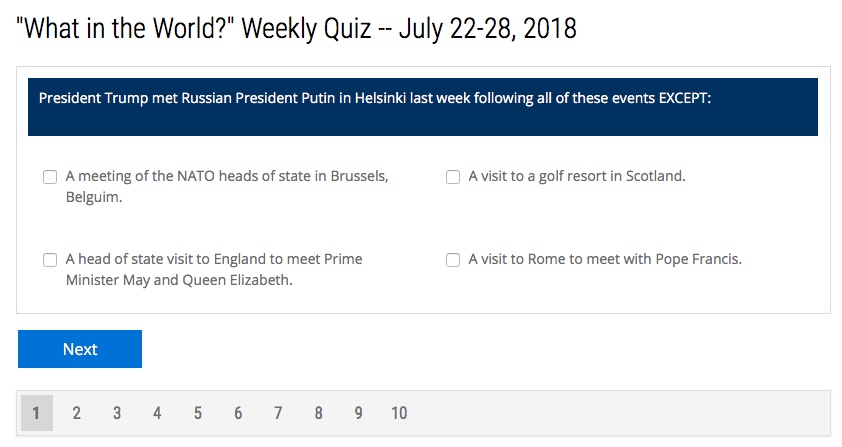 (If you’re a weekly winner you’ll be entered for the monthly prize drawing but you must be a TNWAC member to win.  TNWAC.org/join )

“Us vs. Them: The Failure of Globalism”

“Required reading to help repair a world in pieces and build a world at peace.”
— António Guterres, United Nations Secretary-General

“The best book yet on the waves Donald Trump rode to power. Ian Bremmer is right that rage and scorn are not plans. He provides good practical ideas for what can be done.”
—Lawrence Summers, professor at Harvard’s Kennedy School of Government and former director or the National Economic Council

“Few can beat Ian Bremmer in taking the pulse on the health of nations and the world. Here he dives into the divisions and disputes of the wave of protests and populism that gave the US Donald Trump and Europe Brexit.”
—Carl Bildt, co-chair of European Council on Foreign Relations

“My favorite thinker on geopolitics offers a masterful analysis of why globalism crashed and populism has soared. This book won’t just help you predict the future of nations; it will play a role in shaping that future.”
—Adam Grant, author of Give and Take, Originals, and Option Bwith Sheryl Sandberg

“A crisp and compelling anatomy of present political ills across many countries. Bremmer’s discussion of global approaches to revising the social contract between government and citizen offers a welcome ray of light.”
—Anne-Marie Slaughter, president & CEO of New America

“Global politics is a jungle today.  Thank goodness Ian Bremmer can be your guide.”
—David Miliband, president and CEO of the International Rescue Committee

“Once again, Ian Bremmer provides a striking preview of tomorrow’s top stories. A timely warning, but also a source of hope, Us vs. Themis required reading for those worried about our world’s future.”
—Nouriel Roubini, author of Crisis Economics; professor at New York University’s Stern School of Business; chairman of Roubini Macro Associates

“Ian Bremmer is provocative, controversial, and always intelligent about the state of our world, which he knows so well!”
—Christine Lagarde, Managing Director of the International Monetary Fund (IMF)

Ian Bremmer is the president and founder of Eurasia Group, the leading global political risk research and consulting firm. He has published ten books, including Superpower and the national bestsellers The End of the Free Marketand Every Nation for Itself. He lectures widely and writes a weekly foreign affairs column for TIME magazine, where he’s editor at large. He lives in New York City.

1. Escalating violence between Israel and Hamas over months-long Palestinian protests for the right of return has led to the heaviest fighting in THIS region since the 2014 war:

2. At the annual NATO summit, U.S. president Donald Trump demanded that other members do THIS:

A.  Refuse to sign unilateral energy agreements with Russia
B.  Double their military spending immediately
C.  Refuse to engage in talks with North Korea
D.  Rescind sanctions against Russia for its 2014 invasion of Crimea

3.  Following the NATO summit in Brussels, Mr. Trump traveled to the UK for a state visit, where he was met by widespread protests in several cities.  As part of the protests, a grassroots movement had UK citizens downloading THIS song in order to make it number one on the UK charts the day Mr. Trump arrived:

4. THIS former Pakistani prime minister and his daughter were arrested as they arrived in Lahore from London this week. The former leader and his family were convicted on corruption charges in absentia, and were returning home to help galvanize their flailing Muslim League-Nawaz party ahead of elections on July 25:

5. THIS natural phenomenon is threatening to wreak havoc on the tiny village of Innaarsuit, in Greenland, prompting some residents to evacuate:

6.  Algeria drew international condemnation when it came to light that it had been dealing with a stream of over 100,000 migrants across its southern borders by doing THIS to them:

A. Setting them adrift in the Mediterranean Sea
B. Releasing them in the Sahara and forcing them—at gunpoint—to start walking towards its borders with Mali and Niger
C. Holding them in internment camps
D. Taking children from parents and deporting both separately

Correct Response: B. Releasing them in the Sahara and forcing them—at gunpoint—to start walking towards its borders with Mali and Niger
https://www.bbc.com/news/world-africa-44825056

7.  Mere days after declaring that their “state of war” was over, Ethiopia and Eritrea cemented theirs ties with THIS action:

A.  A state visit by Eritrean President Isaias Afwerki to Ethiopia
B.  Joint military exercises
C.  Accepting the other country’s ambassador
D.  Declaring war on Djibouti

8.  Lawmakers in the Dail, the Republic of Ireland’s lower house of parliament, passed an environmentally friendly bill requiring the country to do THIS, “as soon as practicable.”  The bill is expected to pass the Seanad, or upper house, when it’s taken up in September:

A. Ban all single-use plastic
B. Institute nation-wide mandatory recycling
C. Divest from fossil fuels by selling off shares in gas, coal, and peat
D. Switch all government facilities to green energy

9. An effort to save a diminishing population of THIS critically endangered animal had a heavy setback when eight of eleven animals died after being relocated to a wildlife reserve in Kenya.  The relocation was meant to boost breeding: