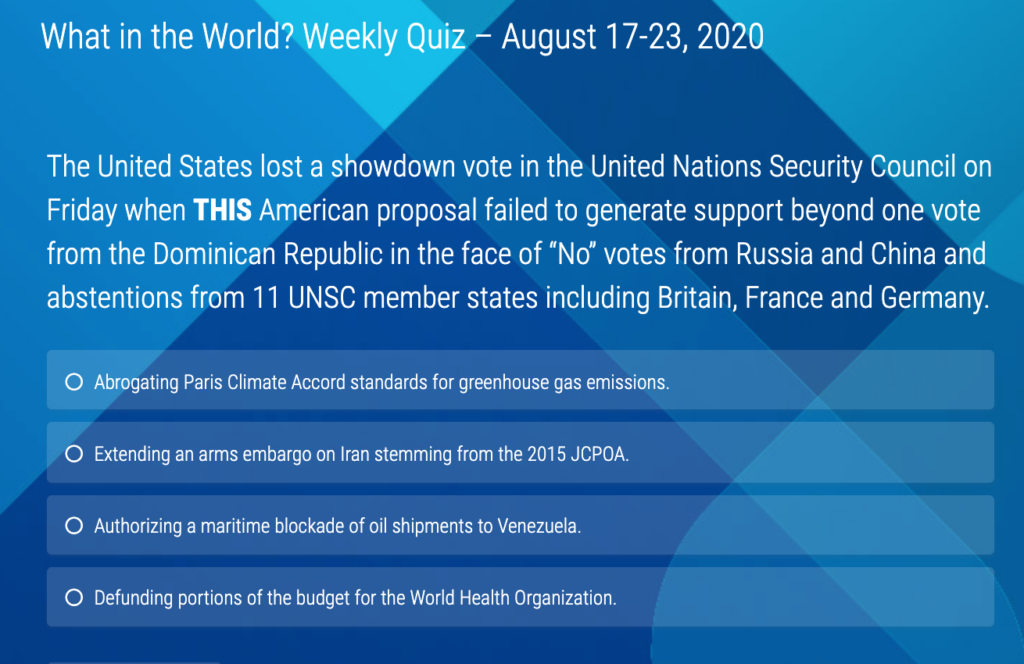 Peter from Peoria, happy you “enjoy the quiz” and “learn something every time.” Thanks Nawzad from Nashville, yes, we try to make the questions “interesting.” Stephen in Jamaica Plain, Mass., glad you enjoy the quiz. Connie in Peoria, sorry you were “yuck” on your answers — better luck today. And Yezzie in Nashville, so happy you “love” the “What in the World? Weekly Quiz.”

1. Authorities in Hong Kong escalated the crackdown on the pro-democracy movement using the newly enacted Chinese national security law by arresting THIS media chief who publishes the “Apple Daily,” a frequent critic of Beijing. About 200 police officers raided the “Apple Daily” offices carting off box-loads of documents while the journalists live-streamed the searches on Facebook.

2. G-7 members France and Germany have rejected American proposals for THIS response to pandemic issues after weeks of talks to address this global challenge, with one European official telling Reuters the American contributions were “rude.”

A. Plans to distribute COVID-19 vaccines to the developing world.
B. Travel restrictions for visitors to the Shengen countries.
C. Reform of the World Health Organization.
D. Tariff reductions to address global economic disruptions.

3. Canada has quickly responded to THIS new Trump Administration trade measure announced on Thursday with a $2.7 billion retaliatory tariff on U.S. goods with Deputy Prime Minister Chyrstia Freeland saying, “We will impose dollar-for-dollar countermeasures in a balanced and perfectly reciprocal retaliation.” THIS step just one month after a new trade deal, the USMCA, went into effect is likely to return tension to bilateral relations.

A. A 10% tariff on aluminum imports.
B. A quota on imports of automobiles produced without U.S. parts.
C. Cancellation of a pipeline project to bring Canada oil to the Midwest.
D. A 25% tariff on dairy products from Canada.

Correct Response: A. A 10% tariff on aluminum imports.
https://www.cnbc.com/2020/08/07/canada-to-impose-tariffs-on-2point7-billion-in-us-goods-after-trump-reignites-trade-feud.html

4. The head of the U.S. National Counterintelligence and Security Center released a report Friday identifying foreign interference in the 2020 elections. President Trump, responding to conclusions his candidacy was being boosted by foreign efforts, commented that, “I think the last person [THIS COUNTRY] wants to see in office is Donald Trump … nobody’s been tougher on [THIS COUNTRY] than I have, ever.”

5. As U.S.-China ties continue to fray, THIS American visited Taiwan, the most senior official to go to the island, claimed by Beijing as a renegade province, since Washington cut ties with Taipei in 1979. China showed its irritation to this challenge to its sovereignty by sending two fighter jets toward the island as the talks began.

6. The State Department and the CDC canceled the “Do Not Travel” advisory for Americans planning trips abroad. The blanket declaration was replaced with country-by-country recommendations. THIS grouping of countries, respectively, were listed as “Level One – Low Risk,” and “Level Four – Do Not Travel.”

7. The State Department lead envoy in its “Maximum Pressure” campaign against Iran, Brian Hook, stepped down with no reason given. He will be replaced by Iran hard-liner Elliott Abrams as tensions with Tehran are likely to increase with THIS vote at the United Nations next week.

A. Vote to “snapback” UN-imposed sanctions after Iran announced it was exceeding limitations on enriched-uranium production.
B. Vote to approve a UN mandated maritime protection regime to safeguard international shipping through the Strait of Hormuz.
C. Vote to extend a five-year old arms embargo against Tehran that was set in the JCPOA to expire in October.
D. Vote to condemn Iranian support of anti-U.S. militias in Iraq.

Correct Response: C. Vote to extend a five-year old arms embargo against Tehran that was set in the JCPOA to expire in October.
https://www.cnbc.com/2020/08/06/top-us-diplomat-for-iran-resigns-ahead-of-un-arms-embargo-vote.html

8. A catastrophic blast in the port of Beirut on Tuesday rocked the city and left over 200 dead and hundred more wounded. The initial indication of the source of the explosion was THIS.

A. Thousands of tons of explosive chemicals impounded from a ship seized in 2014.
B. An attack on the port by Syrian backed militias.
C. About 2,700 tons of ammonium nitrate stockpiled for Hezbollah weapons production.
D. An airstrike on an Iranian shipment of arms to Syria via Beirut.

Correct Response: A. Thousands of tons of explosive chemicals impounded from a ship seized in 2014.
https://www.bbc.com/news/world-middle-east-53720383

9. The blast that rocked Beirut has crippled a city and country already on the edge of being a failed state. The aftermath of the explosion has been THIS.

A. Sectarian factions have joined together to assist the victims and those made homeless by the blast.
B. The United States has dispatched a hospital ship to the port of Beirut to provide medical support.
C. Protesters have attacked and occupied ministry buildings in a reprise of the October 2017 mass demonstrations.
D. The Hezbollah representatives in the legislature have called for the government to resign.

Correct Response: C. Protesters have attacked and occupied ministry buildings in a reprise of the October 2017 mass demonstrations.
https://www.cnn.com/2020/08/08/middleeast/beirut-judgment-day-protests-intl/index.html

10. An investigation into corrupt practices has driven THIS European monarch to flee to Abu Dhabi. He was credited with steering his country from a repressive dictatorship to a viable democracy in the 1970s but has been implicated in numerous wrongdoing incidents. THIS ruler lost his immunity from prosecution when he abdicated in favor of his son in 2014.