It’s Bastille Day, the national day celebration in France. It’s observance, so close to our celebration of Independence, reminds us of the connections our two countries have had since the beginning of our Republic. It easily comes to my mind, having once served aboard the missile submarine USS Lafayette. It was named to honor the French Marquis who played a decisive role commanding American troops at the 1781 Battle of Yorktown alongside French troops commanded by Rochambeau. Few US Navy ships are named for foreign officers.

We’re pleased to share for your consideration the words of U.S. Secretary of State Antony Blinken who marked this year’s Bastille Day celebration:

“We have an enduring and close relationship with France, our oldest Ally.  In the spirit of “Liberté, Égalité, and Fraternité,” the United States cherishes its relationship with France, defined by our shared values and belief in democracy and human rights.  We fought side by side through two World Wars and worked together in the aftermath to create a more prosperous and secure Europe.  We recognize and appreciate French contributions to global security, including in Africa and in the Middle East, and applaud French leadership on climate, including the Paris Agreement.  The United States is committed to working with France to combat the climate crisis and to recover from the COVID-19 pandemic.  Our nations’ partnership is extensive and multifaceted, and we highly value France’s contributions to creating a more peaceful and prosperous world. Best wishes to the people of France for a joyous national day and a successful year ahead.”

Wishes for a safe and prosperous week.

UNDERSTANDING US-RUSSIA RELATIONS AFTER THE SUMMIT

Tuesday evening TNWAC hosted a conversation on the meeting between President Joe Biden and President Vladimir Putin last month in Geneva. Professor Andrei Korobkov and Professor Mark Katz, two eminent scholars on Russian foreign policy, shared insights and perspectives on the context for the summit, the leaders’ agendas and the path ahead for this important and contentious strategic relationship. We invite you to watch or listen to the “Global Dialogue” with Korobkov and Katz. It’s archived (along with scores of top quality programs) on our YouTube.com/TNWAC channel and as a Podcast on SoundCloud.com/TNWAC, and wherever you get your Pods (look for “Global Tennessee”).

Speaking of US-Russia relations, the conversation this week with Professors Korobkov and Katz reminded us of our Ambassadorial Speakers’ program with Ambassador Sergey I. Kislyak in January 2016. You may recall he was a principal actor in the early days of the Trump Administration and was the Russian official who spoke with General Michael Flynn, the newly appointed National Security Advisor. Flynn’s denials to FBI agents of those conversations resulted in his indictment and subsequent travails. When Ambassador Kislyak was with us in Nashville for a TNWAC hosted public events agenda he spoke with Dr. Mimi Barnard at a Global Town Hall at Belmont University.  We invite you to watch the conversation between Barnard and Kislyak, before he became a celebrity, as context for where the relationship between Moscow and Washington has been, as you consider where it is now.

COMPETING FOR THE FUTURE

Your World Affairs Council is pleased to be a partner with the Connecticut World Affairs Council in offering the 2021 Global Security Forum: Competing for the Future, coming to you on October 1-2, 2021. At this forum generals, experts, and foreign leaders will convene to address the most critical global security issues of today and the opportunities of tomorrow. Learn more about the GSF and register for this terrific opportunity.  HERE. 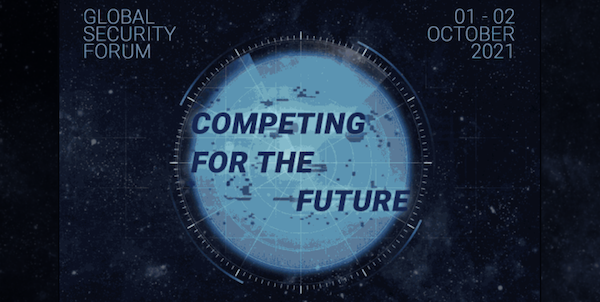 THIS WEEK AROUND THE NETWORK OF WORLD AFFAIRS COUNCILS 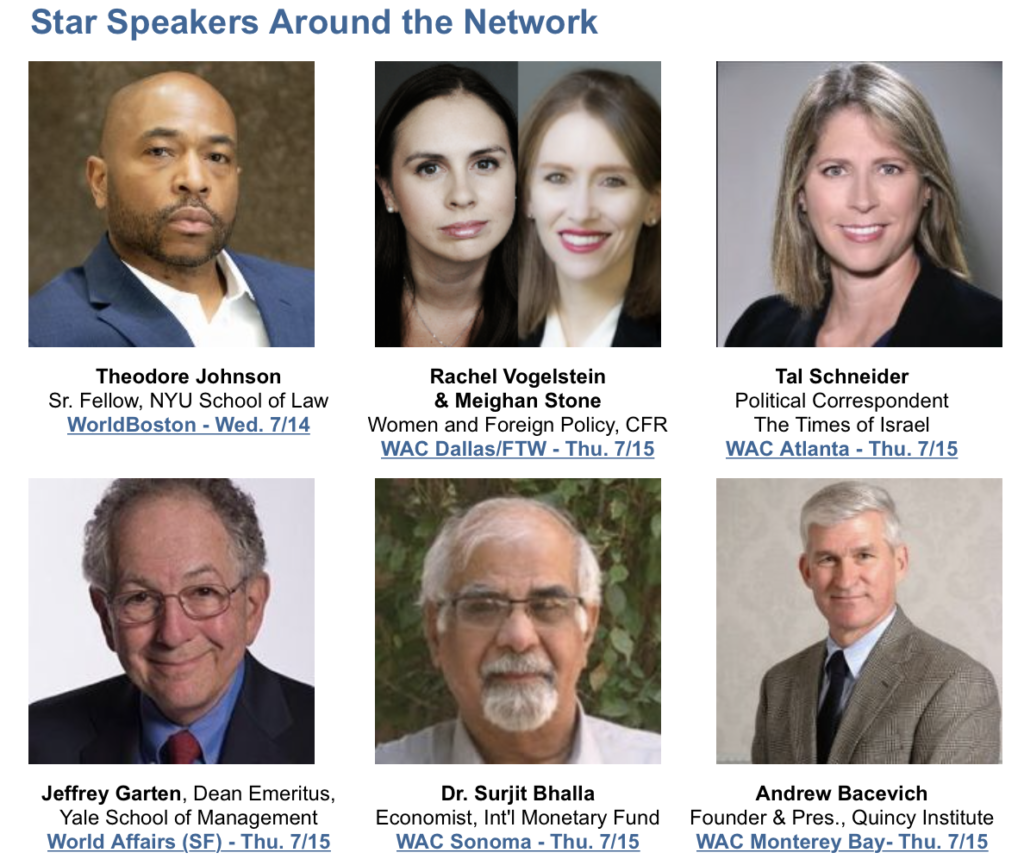 CHECK BELOW FOR DETAILS ON THESE PROGRAMS 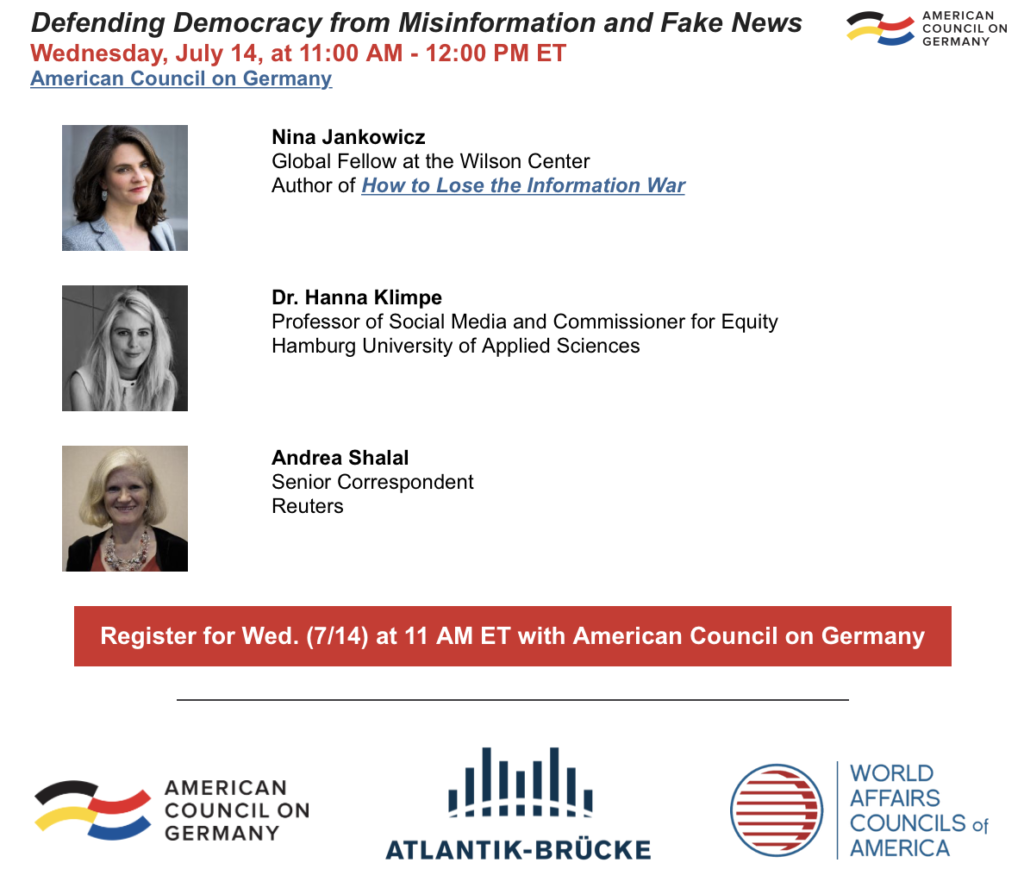 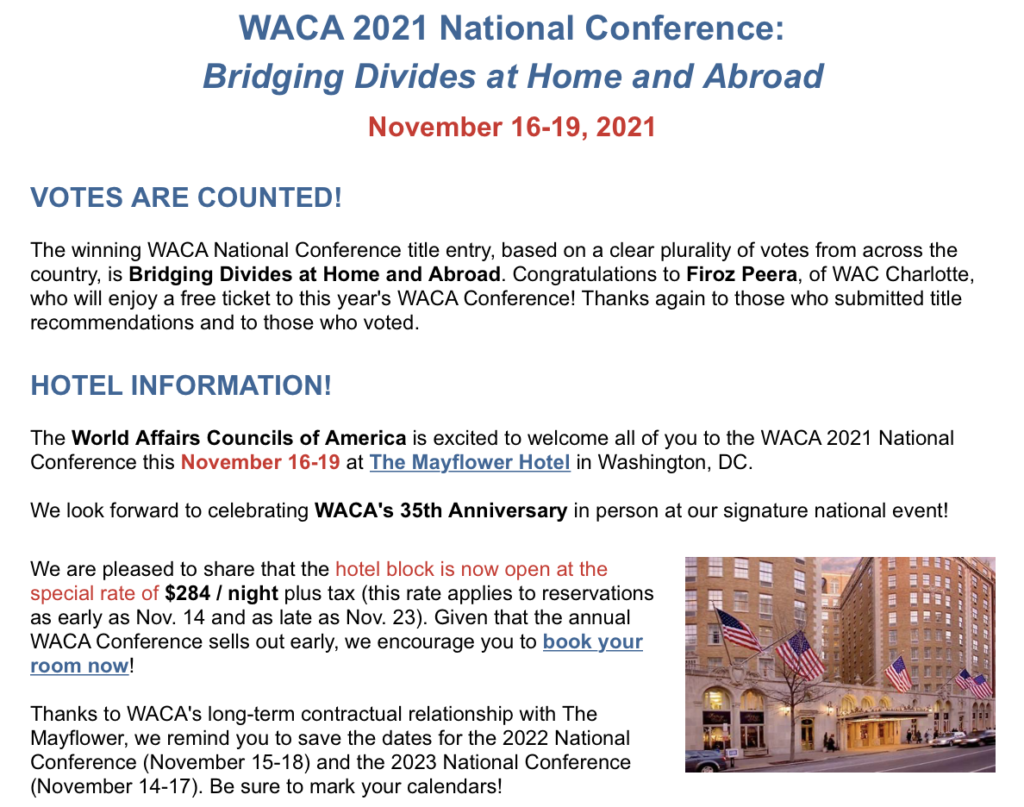 All programs below are accessible online unless otherwise indicated.
Wednesday 7/14
Thursday 7/15
Friday 7/16
Thank you for your support of global affairs awareness and education!