The international scene continues to fascinate those who try to keep up with global developments and issues. This week we are getting to see the inner workings of national security decision making from our top generals and the Defense Secretary, before Congress. There was even a look into the nuclear weapons release chain of command — an apparent “glitch” in the system when a Joint Chiefs Chairman becomes concerned about POTUS’ stability. Then there’s the ongoing spat with the French over the new AUKUS strategic pact in the Indo-Pacific region, along with the Australian snub on a submarine deal. Meanwhile, Kim Jong-un took time away from his Weight Watchers program to oversee the launch of a new hypersonic strategic missile. And we have a likely new Prime Minister in Japan, Mr. Fumio Kishida; a new Chancellor in Germany, but they’ll take time to sort coalition politics; and the same guy in Canada, Mr. Trudeau, who called early elections only to have nothing change. Of course, we continue to have a global fight against Covid-19 and all its variants; against terrorism in dozens of countries; and against the existential threat of climate change — witness November’s summit in Glasgow, COP26.

So, those issues and more are what we concern ourselves with. Connect you to the world.

In October we’ll have: a symposium with top specialists on hot button migration issues, talking about global trends, climate impacts, American immigration issues and the local implications; a China Town Hall featuring CNN’s Fareed Zakaria and our own specialists drilling into US-China relations; and two International Career Panels, one featuring a cross section of professionals and the other focused on “Women in International Business.” Along the way we’ll test your global literacy every Monday morning with our “What in the World? Weekly Quiz.”

We’re pleased to announce that we will host H.E. Ambassador of Japan to the United States Koji Tomita in Nashville on November 2nd. You can look forward to a luncheon session and a Global Town Hall at Belmont University. TNWAC is proud to serve as his host for the Nashville visit and thanks Consul-General Fukushima for support and guidance. We’re inviting our corporate friends to contact me to learn how you can sponsor these events.

Lastly, I’d like to share that Professor Susan Haynes is completing her time with the TNWAC Board of Directors after eight years of service. We have been very fortunate to have had Susan, a Professor of Political Science at Lipscomb University, as a Member of the Board. Susan served for most of that time as the Board Secretary and she has been the lead on our very successful series of International Career Panels. She has inspired her students to know more about the world and they have been TNWAC interns, National Conference scholarship recipients and Academic WorldQuest coaches. It has been obvious to me, working with her students, that she is a special educator. Susan will depart the board but won’t go too far. She accepted an invitation to be on the Advisory Board, so she can stay connected to TNWAC’s work.

Wishes for a safe and prosperous week and, as always, thank you for your support.

Mark you calendar for the fall 2021 sessions of our International Careers Panels. As we did in the spring we’ll have two panels, both via Webinar. On October 6th we’ll host a panel of specialists from a variety of international professions, such as diplomacy, business, NGOs, Peace Corps, legal, academic and military. [Link]  Three weeks later, on October 27, join us again for a conversation with a panel focused on “Women in International Business.” [Link]

Join us on October 13th for a midday symposium examining the accelerating global trends driving migration and the flows of migrants and refugees into the United States and Tennessee. We have a terrific panel lined up: David Plazas of The Tennessean is our moderator; Dr. Marie McAuliffe, Head of Migration Policy Research at the United Nation’s International Organization for Migration (IOM); Pablo Escribano, Specialist in Migration, Environment and Climate Change at the IOM; Molly Hilligoss, Network Director at Welcoming America and a local representative to talk about migration issues in Tennessee. [Registration Link]

This year’s China Town Hall on October 19th will feature Fareed Zakaria, CNN host and author, in a national broadcast that will be part of our TNWAC program. Professor Thomas Schwartz, John Scannapieco and Jeremy Goldkorn will anchor conversations prior to and following the Zakaria program. Join us for this virtual deep dive into U.S.-China relations. [Registration Link]

We have our topics for the 2021-2022 season of our Anne Smedinghoff Academic WorldQuest global affairs challenge. Our practice match and championship match as well as the WACA national competition will be based on these topics:

High school students and teachers be ready to start our Academic WorldQuest season, named in honor of Anne Smedinghoff, an American diplomat who was killed in the line of duty in Afghanistan. The study guide will be out this week. Our first practice match is set for Belmont University on Sunday, December 5th. The TNWAC championship match will be held in early February 2022. Be on the lookout for details on forming teams and getting ready for WorldQuest!

The ink had barely dried on news last week of a landmark defense pact among the United States, United Kingdom and Australia when we sat down for a “Global Tennessee” Podcast with Her Majesty’s Consul General Andrew Staunton. He represents the UK in the Southeast region from the Consulate in Atlanta. We talked about US-UK relations, economic developments especially trade and investment in Tennessee, post-Brexit issues, the AUKUS agreement, national security and global issues and the incomprehensibility of cricket. Check out the “Global Tennessee” series of Podcasts at Spotify, iTunes or wherever you get your Pods, and HERE. 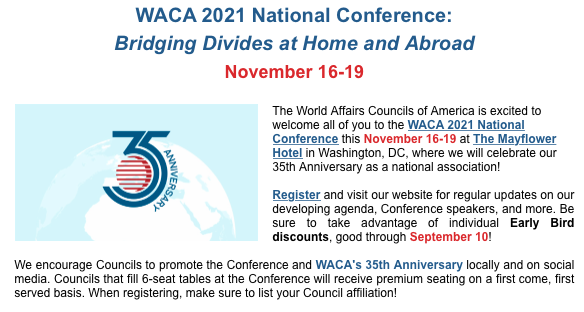 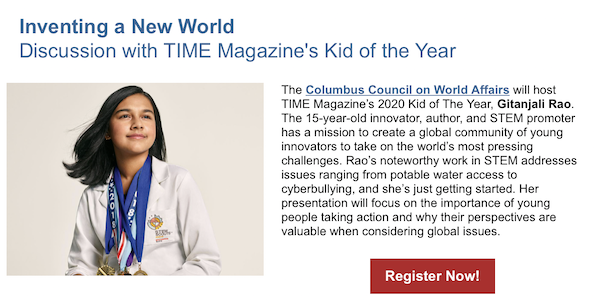 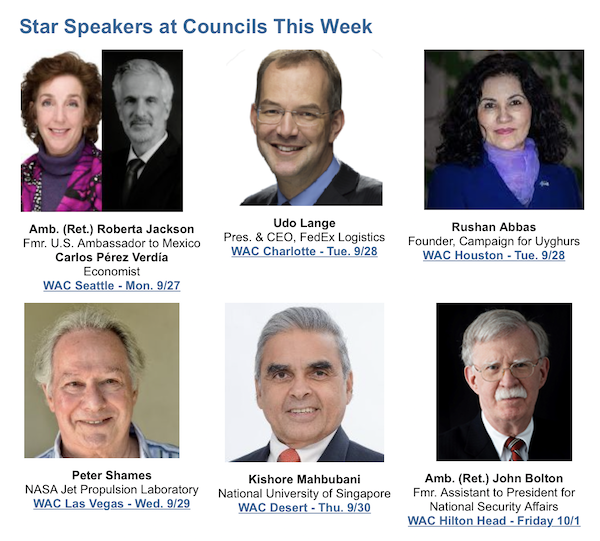 DETAILS AND REGISTRATION IN COUNCIL HIGHLIGHTS BELOW
All programs below are accessible online unless otherwise indicated.
Wednesday 9/29
Thursday 9/30
Friday 10/1
Thank you for your support of global affairs awareness and education!