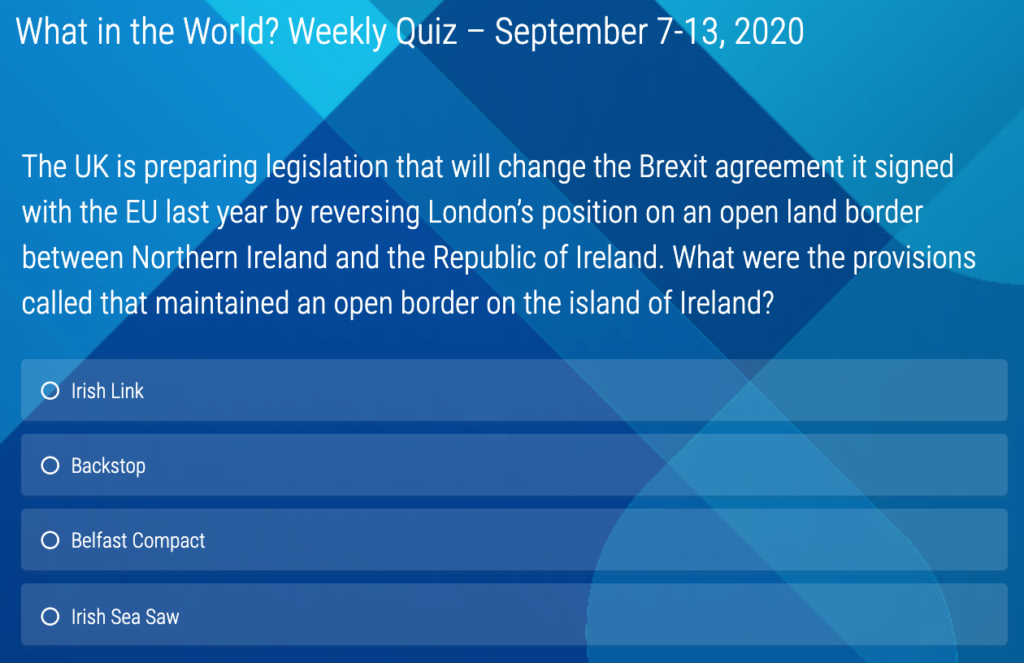 WELL DONE!
Stephen from Boston and Peter from Peoria and Campbell from Nolensville, glad you enjoyed the quiz.  Herb, maybe it is hard but you must be keeping up on current events. You did well!  Judy in Houston also found it challenging and Yezzie in Nashville counts the quiz as “very good brain exercise.” Thanks to all who are quiz-curious every week.
p.s. Thanks, Judy, for becoming a member of TNWAC — and becoming eligible to win the monthly quiz prize!

1. The longest serving prime minister in Japan’s history is stepping down due to health reasons. THIS Prime Minister, the head of the Liberal Democratic Party, was famous for economic policies dubbed “Abenomics” that sought to rebuild Japan’s troubled economy.

2. The Economic Community of West African State (ECOWAS) suspended THIS country from its institutions, shut their borders and stopped banking ties after an August 18th coup toppled President Ibrahim Boubacar Keita. The ECOWAS nations are concerned that instability in THIS country could affect the fight against Islamist militants in the region.

3. President Macron of France is calling for a hard stance among EU allies against Turkey over Ankara’s gas exploration encroachment in the off-shore economic zone of THIS nation. The face-off has taken on a military dimension in the latest irritant between Turkey and France.

4. The World Health Organization has warned that bilateral COVID-19 vaccine deals will limit supplies in what it called “vaccine nationalism.” As a remedy to a small group of rich nations scooping up all vaccine doses the WHO has organized THIS global collaboration designed to give fair and equitable access for every country.

5. The United States will step up responses to what National Security Advisor O’Brien said was “very aggressive” behavior by China, by organizing talks among the so-called “Quad” security partner nations. Which of THESE countries is NOT in the “Quad.”

6. American and Russian Army patrols met in a skirmish that involved patrol vehicles colliding in an open field with a Russian helicopter flying low over U.S. forces in THIS country. President Trump pulled back much of the U.S. force deployed there last year.

7. Last week Tehran reversed itself in a feud with the international community over THIS just as the UN Security Council is wrangling over restoring sanctions against Iran’s economy.

A. Inspection of a payload Iran planned to launch into orbit.
B. Release of several journalists from various EU nations who were arrested for reporting from restricted Iranian nuclear program properties.
C. IAEA inspections of nuclear facilities and activities.
D. Restrictions on interference by Revolutionary Guards to international shipping in the Strait of Hormuz.

8. The world’s largest oil exporter reported a year-on-year decline in oil exports of 55%, or $8.7 billion in revenue, that followed a $12 billion year on year drop in May. THIS country faces a deepening recession as global energy demand has dropped amid the COVID-19 pandemic.

A. A U.S. Navy destroyer sailed near the Paracel Islands “to contest excessive maritime claims and reinforce laws of the sea in international waters.”
B. The Congress of the Philippines vote unanimously in support of plans to enforce an International Court finding on behalf of Manilla about sovereignty of the Spratly Islands.
C. A Vietnam coast guard frigate and a Chinese destroyer collided in a standoff over the navigation near the Paracel Islands, which both countries claim.
D. None of the above.

Correct Response: A. A U.S. Navy destroyer sailed near the Paracel Islands “to contest excessive maritime claims and reinforce laws of the sea in international waters.”
https://www.reuters.com/article/us-japan-us-defense/japan-u-s-confirm-bilateral-treaty-covers-isles-disputed-with-china-kono-says-idUSKBN25P09P?utm_source=reddit.com

10. The Office of the Director of National Intelligence will no longer brief key Congressional committees on THIS issue.