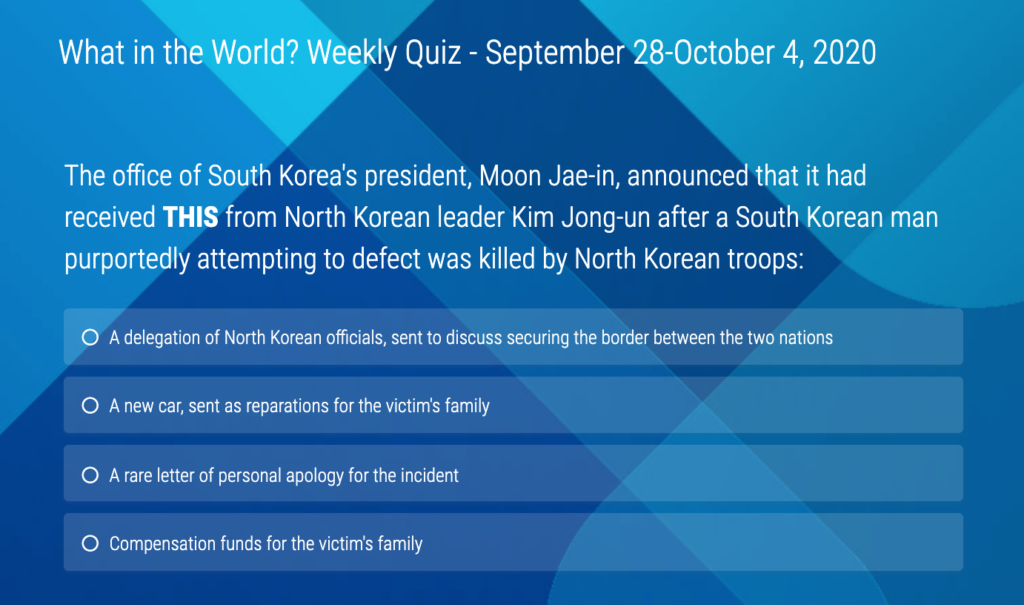 WELL DONE!
Pete from Nashville wondered about “Yoko Ono” from last week. Claudia from Nashville found it “difficult” and “Judy” from Houston agreed it was a “difficult quiz.” Meanwhile, Peter from Peoria “enjoys the challenge” and Herb from New Mexico “loves these.” And we appreciate Yezzie in Nashville telling us the quiz is “very educational.”
Thanks to all who are curious about the world every week.  Good luck this week.

1. The United States is edging toward a showdown with Iran and the international community over THIS issue, with President Trump expected to issue an Executive Order allowing punishing sanctions against foreign entities not complying with Washington’s wishes.

A. An update to limitations on enriched uranium stockpiles in Iran.
B. An extension to an Iranian arms embargo set to expire on October 18.
C. A UN plan to provide COVID-19 aid to Iran.
D. A U.S. proposal to block Iranian shipments of crude oil through the Strait of Hormuz.

Correct Response: B. An extension to an Iranian arms embargo set to expire on October 18.
https://www.reuters.com/article/us-usa-iran-un-arms-explainer/explainer-u-s-says-u-n-sanctions-on-iran-to-be-reimposed-saturday-what-does-that-mean-idUSKBN26A08S

2. When Secretary of State Mike Pompeo visits Tokyo next month for talks with the “Quad” – Japan, India, Australia and the U.S. – about mutual efforts aimed at China, he will meet with THIS new Japanese Prime Minister.

3. The United States beefed up the force of American troops deployed to north east Syria in response to provocations and clashes from THESE forces. A U.S. official said, “”These actions and reinforcements are a clear signal to … to adhere to mutual de-confliction processes and for … and other parties to avoid unprofessional, unsafe and provocative actions…”

4. Democratic Presidential candidate Joe Biden warned the United Kingdom that THIS was in jeopardy if the Good Friday Agreement in Ireland became a “casualty of Brexit.” He was referring to London’s apparent reneging on provisions to keep an open border between the Republic of Ireland and Northern Ireland, part of the UK.

Correct Response: B. Support for a US-UK trade agreement.
https://www.euronews.com/2020/09/17/joe-biden-warns-uk-no-us-trade-deal-if-irish-peace-deal-becomes-casualty-of-brexit

5. The showdown between the U.S. Government and the popular Chinese-owned app TikTok seemed to have been resolved with the announcement last week that Oracle would purchase it from Byte Dance. On Friday there was a new wrinkle when Commerce Secretary Wilbur Ross announced downloads and updates to TikTok and THIS other popular Chinese app would be barred in the United States. The saga continues.

6. The leading American diplomat who has been the lead negotiator (U.S. Special Representative for Afghanistan Reconciliation) with the Taliban in the current phase of U.S. involvement in Afghanistan is THIS former U.S. Ambassador to the United Nations under President George W. Bush.

7. Which statement is NOT correct in understanding the situation in Afghanistan?

A. The Taliban is about 60,000 fighters in a country of 35 million people.
B. The Taliban believe they have won.
C. The Taliban rely on support from India to sustain operations.
D. The Afghan society is likely to be more resistant to Taliban prerogatives now than when Taliban lost power in 2001.

8. Which of these statements is true about North Korea’s nuclear program.

A. North Korea has been interested in acquiring nuclear weapons since the 1990s.
B. The Bush (43) Administration realized it needed a multi-lateral approach to denuclearization efforts so it launched the “Six-Party Talks.”
C. President Trump met with Kim Jung Un in Hong Kong to launch a new phase of personal diplomacy.
D. China welcomes North Korea as a nuclear power and is not concerned about regional proliferation.

Correct Response: B. The Bush (43) Administration realized it needed a multi-lateral approach to denuclearization efforts so it launched the “Six-Party Talks.”
https://youtu.be/Dmft3FUr8mk

9. Which of these is NOT an irritant in US-Russian relations?

A. The poisoning of Alexander Navalny.
B. The annexation of Crimea.
C. The Russian withdrawal from the INF treaty.
D. The Russian-backed militia activities in Eastern Ukraine.