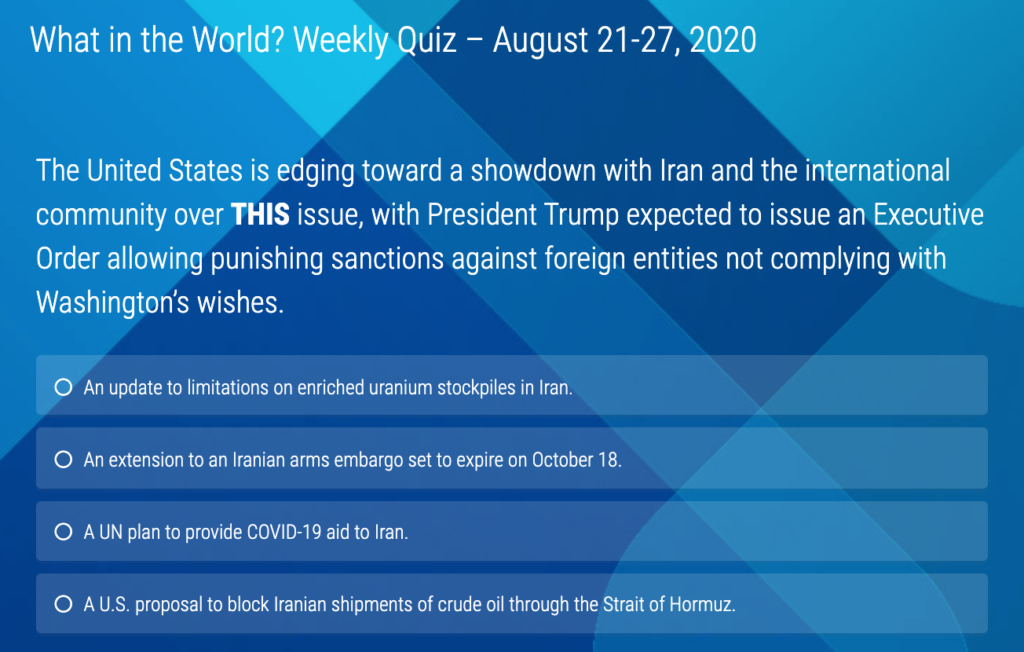 WELL DONE!
Himanshu from Nashville said it was “easy,” Judy in Houston found it challenging, and Barb in Peoria said it was “really tough.” Sounds like it was a Goldilocks quiz. Just right.
Roger from Washington (Illinois), yes, we too think “the quiz is always fun.”
Thanks to all who are curious about the world every week.

1. Representatives of the Afghan government and THIS organization met in Qatar this week to begin negotiations aimed at assuring a peaceful future for Afghanistan:

2. Two military deserters from THIS country gave the first video-recorded testimony of crimes against Rohingya Muslims:

3. Rieli Franciscato, an expert in uncontacted tribes, was killed in THIS region while on a mission to protect an indigenous tribe from outsiders. It is believed that the arrow that killed Mr. Franciscato was shot by a member of the very tribe he was trying to protect:

4. A fire in the Moria migrant and refugee camp left over 13,000 people homeless on THIS Mediterranean island:

5. Peru’s congress voted to begin impeachment proceedings against the nation’s president after audio recordings surfaced of him discussing ways to disguise the misuse of public funds. Who is the current president of Peru?

6. Stretching from Sudan to Senegal, severe flooding has paralyzed much of Africa’s Sahel. In Senegal, a year’s worth of rain fell in 24 hours, while Burkina Faso has declared a state of natural catastrophe. THIS city, the capital of Niger, was left completely underwater:

7. On the heels of the United Arab Emirates’ historic decision to normalize relations with Israel, THIS nation also announced that it would officially recognize Israel and begin establishing diplomatic and economic ties with the Jewish state:

8. The “longest standoff in European maritime history” ended when 27 migrants were allowed to disembark on THIS Mediterranean island, after spending 38 days at sea, most of them aboard a Danish chemical tanker that rescued them at the behest of the Maltese government. The Maersk Etienne picked up the migrants of the Libyan coast at the beginning of August when their overcrowded boat was found in distress:

Correct Response: D. All of the above
https://www.nytimes.com/2020/09/09/opinion/united-states-social-progress.html

10. THIS wealthy and well-known Brit has installed a drive-in movie theater on the grounds of their home to provide pandemic-proof entertainment for their compatriots. 1917, Rocket Man and Bohemian Rhapsody are among the films slated to be shown: