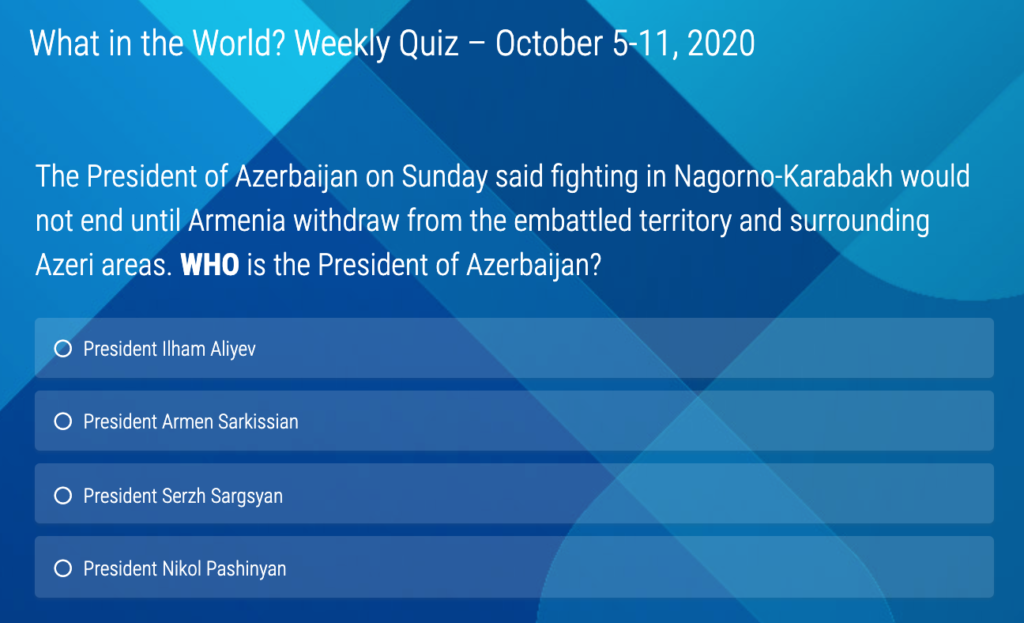 WELL DONE!
Joseph from Bedford, Texas, thanks for joining the quiz and your “this is great” note. Judy  from Edwards, IL thought last week’s quiz was “difficult,” so did Connie from Peoria. But Judy form Houston said she “did better” with this one.
Thanks to all who are curious about the world every week.  Good luck this week.

1. The office of South Korea’s president, Moon Jae-in, announced that it had received THIS from North Korean leader Kim Jong-un after a South Korean man purportedly attempting to defect was killed by North Korean troops:

Correct Response: C. A rare letter of personal apology for the incident
https://www.bbc.com/news/world-asia-54291550

2. A referendum in Switzerland on Sunday will determine the fate of that country’s current freedom of movement agreement with the European Union. Should Swiss voters decide to close its borders to free movement, they will also give up access to THIS:

A. Access to Europe’s free-trade areas
B. Collaboration with Brussels on the environment and education
C. Ease of transport between Switzerland and other EU countries
D. All of these

4. Farmers across India are blocking roads and railroad tracks to protest agricultural market reforms proposed by THIS party, India’s ruling party since 2014. India’s farmers are afraid that the new reforms will strip them of the protection against market forces that they currently enjoy:

5. Question of the week from United States Institute of Peace (USIP) reports.
American peace negotiator Zalmay Khalilizad spoke about Afghan aspirations and the failure to build peace in response to THIS 1980s event saying the current talks “have opened the door to the two sides sitting together to correct history.”

6. In the midst of a severe economic downturn that has seen unemployment skyrocket to 37% and in the aftermath of a massive explosion that killed hundreds and injured thousands, Lebanon suffered another setback in September when THIS happened:

7. The United States passed the grim milestone of 200,000 deaths due to COVID-19 this week. For perspective, which of the following statements is true?

A. Three times more Americans have died from COVID-19 than did in the Vietnam War
B. The COVID-19 death toll is equivalent to roughly 65 times the number of deaths from the 9/11 attacks
C. COVID-19 has killed a larger percentage of the U.S. population than it has in any other wealthy country
D. All of the above

8. In a secret swearing-in ceremony designed to circumvent protests, Alexander Lukashenko was inaugurated in September for a sixth term as president of THIS country:

9. Officials at Helsinki’s airport are piloting a new method of screening arriving passengers for COVID-19, and Finnish researchers say preliminary results are promising. Instead of the dreaded nasal swab, the new tests use THIS:

A. Chewable, fruit-flavored tablets that give a purple hue to the mouths of those infected, and which have nearly 100% accuracy
B. Sniffer dogs who can detect infections with nearly 100% accuracy, even before symptoms develop
C. 15-minute hair follicle tests that show infection when exposed to hydrogen peroxide
D. Quick-stick blood tests that indicate high white blood-cell counts, a known precursor in those who later exhibit symptoms of the virus

Correct Response: B. Sniffer dogs who can detect infections with nearly 100% accuracy, even before symptoms develop
https://www.theguardian.com/world/2020/sep/24/close-to-100-accuracy-airport-enlists-sniffer-dogs-to-test-for-covid-19

10. The French government recently announced that it will increase the amount of time employees get for THIS type of leave, doubling it from 14 days to 28: