“America is back,” according to President Joe Biden in his speech Friday to the Munich Security Conference. The United States has returned to the Paris Climate Accord, the World Health Organization, the Human Rights Council at the United Nations and is following up on Biden’s campaign pledge to rejoin the Joint Comprehensive Plan of Action (JCPOA), the Iran nuclear deal.

Getting back into the JCPOA is not an easy task. There are political considerations about who makes the first move — Iran returning to the agreement constraints or the United States scaling back on economic sanctions. There are timing and political obstacles on the Iranian side — legislative dictates, holiday stand downs and a looming presidential campaign and vote which could be a game changer in Iran’s readiness to deal.

The conversations about the JCPOA return seem to change daily as all sides know the clock is ticking. The important objective for the United States and its allies is to forestall an Iranian nuclear weapon. And, as I argue in the op-ed below, written jointly with Kelsey Davenport, the JCPOA is the best, short-term solution to reach that objective. The op-ed appeared in “The Tennessean” on Sunday in print and online and the opinions express are my own.

Kelsey Davenport is the Director of Nonproliferation Policy at the Arms Control Association, an eminent specialist in the Iranian nuclear program and the JCPOA. She will be my guest on a TNWAC special Global Town Hall, tomorrow (Thursday) evening, February 25th at 5:30pm Central Time.

You should register for this program at the button below. And please read the op-ed so that you’ll come prepared with good questions for Ms. Davenport. 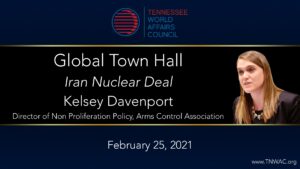 The Clock is Ticking on a Nuclear Deal with Iran | Opinion

The roller coaster ride that is the United States’ relationship with Iran picked up speed in 2021. The January anniversary of a deadly U.S. drone attack on General Qassem Soleimani brought thousands to the streets in Iran. The killing of the chief of the Revolutionary Guard Corps, responsible for militancy abroad, brought threats of reprisals.

Washington responded, positioning an aircraft carrier and a Tomahawk missile laden submarine near Iran and a B-52 deterrent fly-by. The anniversary passed without incident.

Overlaying the threat of military action is the prospect of Iran continuing nuclear activities beyond the multilateral 2015 nuclear agreement, the Joint Comprehensive Plan of Action, or JCPOA. President Biden has an opportunity to restore limits on Iran’s nuclear program and head off an escalatory spiral of tensions that increases the risk of conflict, but time is short.

Recall the permanent five UN Security Council members — the U.S., UK, France, China, Russia – plus Germany and the European Union agreed with Iran to relax sanctions in exchange for reductions and restraints on nuclear fuel production and acceptance of thorough international inspections. The agreement affirmed that “under no circumstances will Iran ever seek, develop or acquire nuclear weapons.” More than two years of full implementation of the nuclear deal demonstrated its effectiveness and verifiability.

President Trump withdrew from the JCPOA in May 2018—despite Iran’s compliance with the accord—promising a better deal and scrapping a signature foreign policy achievement of Obama. U.S. policy, quarterbacked by Secretary of State Pompeo, replaced the nuclear agreement which had enjoyed Iranian compliance at that point, with a campaign of “Maximum Pressure.” Pompeo laid out a 12-point list of demands to be met before a return to negotiations. It failed.

The tit-for-tat provocations included the November assassination of Iran’s top nuclear scientist, widely believed to be an operation mounted by Israel with an American wink. Iran’s parliament responded by announcing plans to ratchet up its nuclear program, including increasing uranium enrichment levels in January, and a February 23, 2021 deadline for concessions or the government would be required to limit UN inspectors’ access to nuclear facilities.

President Biden pledged to return the U.S. to the JCPOA but the new Administration is calling for Iran to resume full compliance first. Moreover, Secretary of State Antony Blinken said the goal of U.S. policy toward Iran was to restore the JCPOA and then build on it, using diplomacy to reduce Iranian malevolent activities in the region and place limits on ballistic missiles.

While Iran supports a return to full implementation of the nuclear deal by all parties, President Hassan Rouhani has called for American actions first, since Washington was the party that left the JCPOA. He says Tehran has no appetite for negotiations until the agreement is restored.

Sequencing a U.S. and Iranian mutual return to the JCPOA will be challenge, but it is in the best interest of the United States for the Biden administration to act quickly.

Iran’s uranium enrichment in excess of the deal’s limits could be quickly undone but the steps coming pose a more significant risk and are more difficult to reverse. Iran is stopping short of expelling international inspectors but any limits on their access will fuel speculation it’s engaged in illicit activities.

Biden’s room for diplomacy is further constrained by the calendar. Iranian observance of Nowruz, the Persian New Year, will shut down most activities in the country for two weeks starting on March 20th. It will be followed by a campaign period leading to the June 18th presidential election. Term-limited President Hassan Rouhani presided over the JCPOA signing and hardliners could capitalize on a failure of the agreement.

Biden recognizes the ultimate objective of preventing Iran assembling the fissile material necessary to build a nuclear weapon and recognizes challenges to an agreement. The White House convened National Security Council meeting this month to review and sharpen the strategy moving forward.

Based on our years of specializing in research and analysis of proliferation of WMD systems especially the case of Iran’s nuclear program, we share the sense of urgency attached to quick return of the United States to the JCPOA.

In announcing the agreement in 2015, President Obama said, “It contains the most comprehensive inspection and verification regime ever negotiated to monitor a nuclear program.” He said it achieves one of our most critical security objectives—verifiably blocking Iran’s pathways to a nuclear deal.  As such, it is a very good deal.

The preeminent goal is stopping Iran from acquiring nuclear weapons and the surest path to that goal is for the United States to rejoin the Joint Comprehensive Plan of Action at the earliest opportunity. The clock is ticking.

Kelsey Davenport is Director of Nonproliferation Policy at the Arms Control Association, a national nonpartisan organization dedicated to promoting public understanding of and support for effective arms control policies.

Lt. Cmdr. Patrick W. Ryan, USN (Retired) is founding president of the Tennessee World Affairs Council. He served 26-years in the Navy as a Submariner and Intelligence Officer and has extensive experience in analysis of Iranian military-political issues and weapons of mass destruction. These are his opinions.

Davenport and Ryan will talk about the Iranian “nuclear deal” at a Zoom Global Town Hall hosted by the Tennessee World Affairs Council, Thursday, February 25, 2021 at 5:30pm CT. Details/registration at TNWAC.org.

Published in “The Tennessean”