It’s Earth Day. And the news is not good. It is not a happy day.

Lost in the global focus on the war in Europe was the latest dire news from the United Nations Secretary General — in the wake of findings from the Intergovernmental Panel on Climate Change — that “unless governments everywhere reassess their energy policies, the world will be uninhabitable.”

No more sobering warning could be possible.

And yet, governments, businesses and people are not doing what is necessary. Economic expediency and political interests have ignored decades of warnings. Vested interests have sought to downplay the threat and challenge the science behind the warnings.

Earth Day launched in 1970. I’m old enough to have participated in the inaugural event as a teenager volunteering at an Earth Day rally in Manhattan. It was a vague notion at the time but there was solid science about the impact of pollution and other man-made influences on our environment. Even then. Fifty-two years ago. Now we’ve arrived at the closing of a window of opportunity.

A TV program from that time sought to scare people about the consequences of our sloppy stewardship of the environment using the format of the dramatic “The War of the Worlds” 1938 radio broadcast. In the manner of Orson Welles portrayal of an alien invasion a contemporary newscaster read reports about the climate crisis with news bulletins about new fictional catastrophes that had just occurred.

The news is no longer a dramatization. There’s more than enough reporting on the impact of climate change — melting ice cap, ocean rise, increasing storm severity, climate related migration, droughts, floods. Yet, “unless governments everywhere reassess their energy policies, the world will be uninhabitable.” And still they wait.

“unless governments everywhere reassess their energy policies, the world will be uninhabitable.”

Please take a look at the resources and information on the Earth Day web site and other sources. And look forward to TNWAC’s initiative to put the “Climate Crisis” front and center in our global affairs awareness program agenda.

We don’t have another fifty years to wait for action. 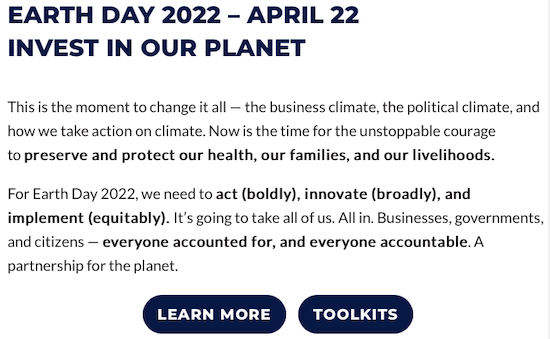 More about “Our Earth, Our Home”
Your donation today will support our “Climate Challenge” program initiative.