Check your global affairs awareness with these ten questions taken from the week’s news reports provided via @TNWAC #TNWACquiz.(If you’re a weekly winner you’ll be entered for the monthly prize drawing but you must be a TNWAC member to win.  TNWAC.org/join) 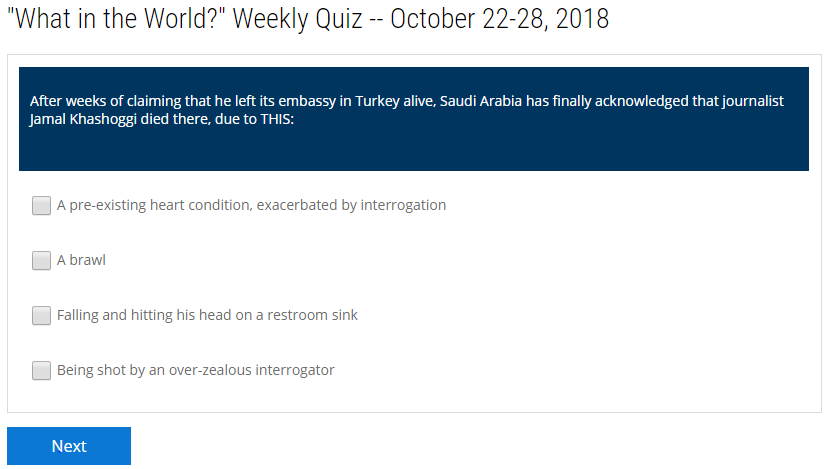 (If you’re a weekly winner you’ll be entered for the monthly prize drawing but you must be a TNWAC member to win.  TNWAC.org/join)

Don’t forget to JOIN as a World Affairs Council member (TNWAC.org/join) to be eligible to win the monthly quiz prize.

1. The apparent abduction and probable murder of Jamal Khashoggi at the Saudi Arabian consulate in Istanbul has led to international condemnation. Who was Jamal Khashoggi?

2.  As crude oil futures edged into $85 a barrel territory industry officials are warning of a month or two of extreme volatility in market pricing based on a continued robust global economy and THIS looming activity.

3. Last week shocking report on the severity and speed of climate change was released that said avoiding major damage would require changing the global economy in a way that has “no documented historic precedent.” The report was produced by a scientific group convened by the UN as prescribed by this agreement.

A.  The 2015 UNFCC Paris Agreement.
B.  The Charter of the UN Educational, Scientific and Cultural Organization
(UNESCO) based in Paris.
C.  The 2017 World Health Organization (WHO) Brasilia Summit
D.  The 2016 Group of Twenty Final Communique

4.  The European Union threw cold water on prospects for THIS critical deal being negotiated in Brussels this week when its spokesman said, “While we are working hard for a deal, our preparedness and contingency work is continuing and intensifying.”

A.  Renewal of the NATO Charter.
B.  Medium range nuclear missile treaty with the Russian Federation.
C.  Post-Brexit relations between the UK and the EU.
D.  A European Union agreement on migration policy with frontline nations.

Correct Response: C.  Post-Brexit relations between the UK and the EU.
https://www.reuters.com/article/us-britain-eu-commission/eu-commission-says-preparations-for-no-deal-brexit-continue-idUSKCN1MP168

5.  WikiLeaks chief Julian Assange had his Internet access restored by THIS country’s embassy in London where he has been in refuge for six years to avoid being extradited to the United States. THIS government suspended his access in March to avoid damaging diplomatic relations after Assange discussed sensitive international issues on social media. He sought protection after backlash from his role in the massive disclosure of classified documents by Chelsea Manning in 2010.

6.  Beijing has toughened its approach to political activity in THIS former British Crown Colony which was established as a Special Administrative Region of China under an agreement which handed it over in 1997.

7.  In a week where British think-tank reports said that, “The Syrian state has become hostage to the regime’s external patrons, Iran and Russia,” the Syrian Foreign Minister threatened THIS last hold-out province. He said it was up to Russia to decide if rebels were complying with an agreement in order to avoid a Syrian government onslaught against a city of three million people.

8.  North and South Korea agreed last week to reopen road and rail connections as the two press ahead with improvements in inter-Korean relations stemming from several summits between DPRK leader Kim Jong Un and THIS Republic of Korea president.

9.  Saudi Arabia countered President Trump’s threat of “severe punishment” over the Khashoggi affair with a “total rejection of any threats and attempts to undermine it,” and said, “if it receives any action, it will respond with greater action, and that the Kingdom’s economy has an influential and vital role in the global economy.” Meanwhile, Trump indicated his actions would take into consideration THIS concern.

Correct Response: B.  Prospects for weapons sales to the Kingdom.
https://www.reuters.com/article/us-saudi-politics-dissident-sanctions/saudi-arabia-says-it-will-respond-to-any-economic-sanctions-spa-idUSKCN1MO0F1

10.  A growing migrant caravan of about 1,800 people – adults and children and mothers with babies – from THIS country was headed north to seek asylum from violence and poverty as Vice President Pence told Central American leaders US support for development and investment depended on their efforts to quell mass migration.