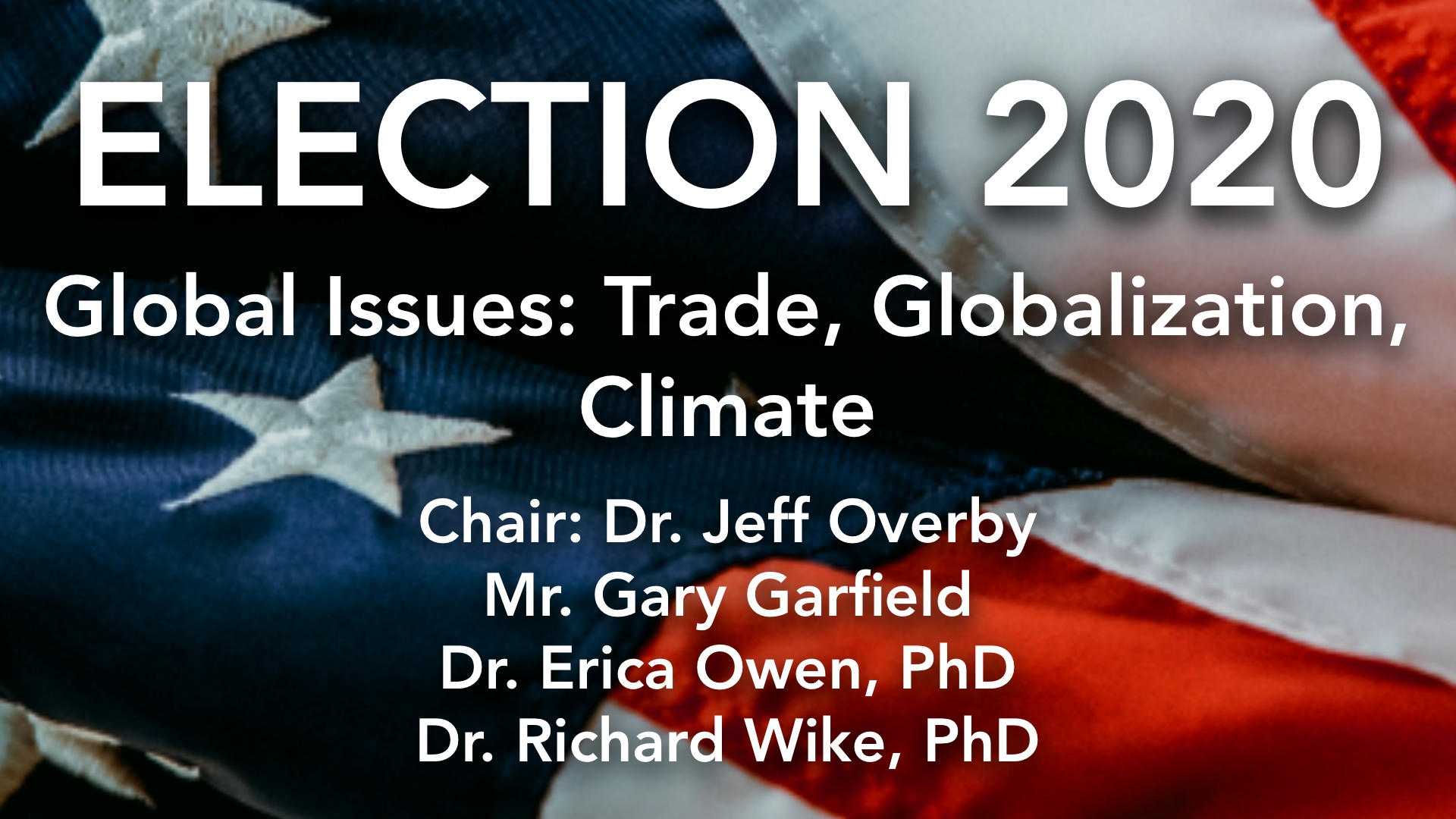 The Global Issues Panel of our Election 2020 project focuses on three key issues affecting American security and prosperity: climate change, trade and globalization. We have assembled a distinguished panel of specialists to provide background and context.

Climate: The United Nations says of the importance of understanding climate change: Climate Change is the defining issue of our time and we are at a defining moment. From shifting weather patterns that threaten food production, to rising sea levels that increase the risk of catastrophic flooding, the impacts of climate change are global in scope and unprecedented in scale.

Scroll down for reference material on these important, complicated topics and materials provided by the panelists.

TNWAC is presenting interviews and panels with distinguished specialists in international affairs to prepare voters with background and context on the critical issues they should know about the world.

He has been Director of Nashville Area Chamber of Commerce since July 03, 2014 and served as an Independent Director of Piedmont Natural Gas Co. Inc. since June 2015. He serves as a Director of Firestone Diversified Products, LLC, the Tennessee Chapter of the Crohn’s & Colitis Foundation, the Nashville Ballet and the Middle Tennessee Council, Boy Scouts of America. He is also a member of the American Bar Association and the Nashville Bar Association. He has been the United Way of Metropolitan Nashville’s Board of Trustees since January 2011. Since 2011, he has also served on the Board of Visitors for Vanderbilt University’s Owen Graduate School of Business.

In 2012, Mr. Garfield was named National Chair for the Take Steps Be Heard walk program for the Crohn’s and Colitis Foundation of America. He was a 2013 member of the Greater Nashville Executive Leadership Team for the American Heart Association and is serving as the 2015 Heart Walk Chairman.

Mr. Garfield holds a Bachelor of Arts in Philosophy from Wittenberg University and his Juris Doctor from Cincinnati University.

Assistant Professor, Graduate School of Public and International Affairs, University of Pittsburgh. Focusing on the intersection of domestic politics and the global economy, Owen’s research examines how political processes resolve the conflict between the economic winners and losers of globalization. Examining labor markets and how globalization affects the economic well-being of the public, her goal is to call attention to the importance of the role of labor as a political actor. Dr. Owen was previously Assistant Professor, Department of Political Science, Texas A&M University. She was a Visiting Researcher, Department of Political Science, University of Zurich and Post-doctoral Research Fellow, Princeton University, Niehaus Center for Globalization and Governance. Professor Owen received her Ph.D at the University of Minnesota; Political Science: International Relations and methodology.

Richard Wike is director of global attitudes research at Pew Research Center. He conducts research and writes about international public opinion on a variety of topics, such as America’s global image, the rise of China, democracy, and globalization. He is an author of numerous Pew Research Center reports, including U.S. Image Suffers as Publics Around World Question Trump’s Leadership; Post-Brexit, Europeans More Favorable Toward EU; Globally, Broad Support for Representative and Direct Democracy; Chinese Public Sees More Powerful Role in World, Names U.S. as Top Threat; and Global Support for Principle of Free Expression, but Opposition to Some Forms of Speech. In addition, he has written pieces for The Atlantic, Financial Times, the Guardian, Politico, Foreign Policy, CNN, BBC, CNBC, and other online and print publications. Wike has been interviewed by American news organizations such as The Wall Street Journal, The Washington Post, NBC, CNN, C-SPAN, and NPR, as well as numerous non-U.S. news organizations, including The Financial Times, The Guardian, El País, BBC, Deutsche Welle, France 24 and Al Jazeera. Wike gives talks and presentations to a variety of audiences, including government, think tanks, business groups, and academic conferences. Wike received a doctorate in political science from Emory University. Before joining Pew Research Center, he was a senior associate for international and corporate clients at Greenberg Quinlan Rosner Research.