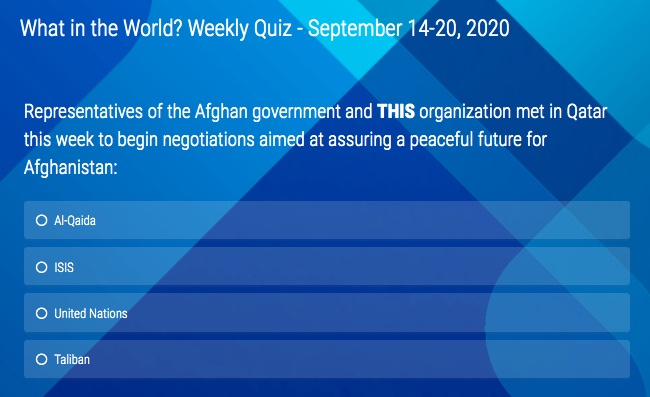 WELL DONE!
Stephen from Boston and Campbell from Nolensville, glad you enjoyed the quiz.  Peter from Peoria, it’s good to learn something from the quiz, we learn too. Judy in Houston found it “easier” this week — we’ll have to work on that!
Thanks to all who are curious about the world every week.

1. The UK is preparing legislation that will change the Brexit agreement it signed with the EU last year by reversing London’s position on an open land border between Northern Ireland and the Republic of Ireland. What were the provisions called that maintained an open border on the island of Ireland?

3. Protesters angry over an apparent rigged presidential election continued to fill the streets of THIS capital city, as opposition figure Maria Kolesnikova was grabbed off a street by masked men in a van and was said to be in government detention.

5. Eight people have been sentenced in Saudi Arabia in connection with the murder of THIS journalist, a Saudi citizen who was living and working in self-imposed exile in the United States.

6. The United States will cut as much as $100 million in aid to THIS country over the construction of a dam on the Nile, known as the GERD.

7. The United States is redirecting $80 million it owes to THIS organization to help pay its United Nations debt. President Trump announced the U.S. plans to leave IT next July.

8. Secretary of State Pompeo announced sanctions against two individuals in THIS organization in an effort to forestall investigations of U.S. individuals on charges of torture in Afghanistan. The sanctions drew criticism from Human Rights Watch, “The Trump administration’s perverse use of sanctions, devised for alleged terrorists and drug kingpins, against prosecutors seeking justice for grave international crimes, magnifies the failure of the US to prosecute torture.”

9. American troops and tanks started arriving in THIS Baltic nation last week for a two-month deployment near the Belarus border. The deployment, including training with forces from France, Italy, Germany, and Poland has been made amid denials by a government spokesman that it was meant to send a message to the Minsk leadership, as they battle post-election protests.

10. A cyclone named Haishen struck the coasts of the Korean Peninsula and Japan causing widespread damage. What are cyclones in the Western Pacific known as?