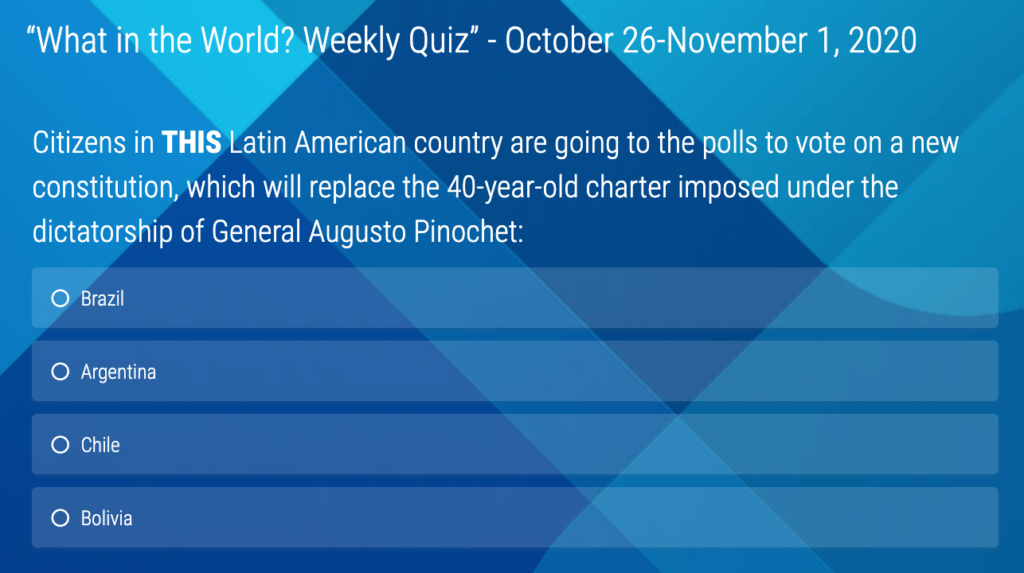 WELL DONE!
We’re almost out of ink listing everyone who did very well last week. Nice job!
Thanks to all who are curious about the world every week.  Good luck this week. 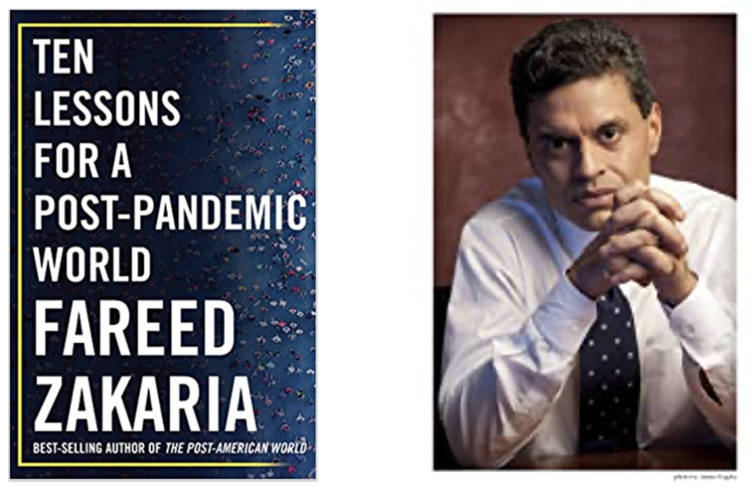 1. The Labour Party of THIS Prime Minister of New Zealand won a historic victory in voting on Saturday taking 64 of 120 seats in Parliament, the largest margin since the country began a proportional representation system in 1996. The Prime Minister increased her popularity by pushing through a gun ban after a mass shooting last year and her “go hard, go early” push in response to the coronavirus pandemic, which resulted in the elimination of local COVID-19 spread.

2. The international embargo on arms sales with THIS country expired on Sunday fueling a war of words between Washington and Moscow. Secretary of State Pompeo said, “The United States is prepared to use its domestic authorities to sanction any individual or entity that materially contributes to the supply, sale, or transfer of conventional arms to or from” THIS country. A Russian official Tweeted, ““And please change words ‘sanctions’ and ‘punishment’ in your vocabulary to ‘dialogue’ and ‘engagement’. That would help a lot! Make US respected again!”

3. A Russian-brokered ceasefire in Nagorno-Karabakh on Saturday was quickly broken. Armenia claimed THIS country launched artillery attacks four minutes into the ceasefire. THIS country said it was Armenia that broke the truce two minutes after it took effect.

4. The head of THIS country’s military from 2012 to 2018, Cienfuegos Zepeda, was arrested on drug and money laundering charges when he arrived at Los Angeles International Airport, shaking confidence in the trust of the Armed Forces.

5. The protest movement in THIS country, driven mostly by youth, is preparing for new demonstrations on October 25th, a key anniversary. The protestors have made gains, with the support of Grand Ayatollah Ali al-Sistani. However, significant challenges remain. COVID and a downturn in oil prices have burdened the government of Prime Minister Kadhimi, which is facing the threatened shutdown of the U.S. Embassy there. [USIP Question of the Week]

6. The S-400 advanced mobile air defense system delivered from Russia to THIS country in 2019 was tested last week and led to sharp condemnation from the U.S. State Department and the Pentagon which warned, the S-400 “should not be activated. Doing so risks serious consequences for our security relationship.”

7. Who announced sanctions against Russians in response to the attempted assassination of Alexei Navalny. The Russian activist was stricken on an airplane after being poisoned with a type of Novichok nerve agent, a known Soviet era weapon.

A. The Northern Ireland “Backstop” issues of the trade agreement have been resolved.
B. The trade talks are “over” according to the UK Prime Minister’s office.
C. EU leaders have shut down the possibility of a trade agreement with the UK.
D. The EU and UK agreed to a six-month extension of trade talks.

Correct Response: B. The trade talks are “over” according to the UK Prime Minister’s office.
https://www.bbc.com/news/uk-politics-54566897

9. China’s President Xi Jinping raised the temperature in the war of words over THIS island last week when he told troops to prepare for war on a visit to Guangdong Province.

10. Facebook donated $1.3 million to the museum at THIS famous site in England where WWII code-breakers decrypted German military messages. The 10,000 mostly women code-breakers are credited with turning the tide of victory by providing Allied forces critical military intelligence.