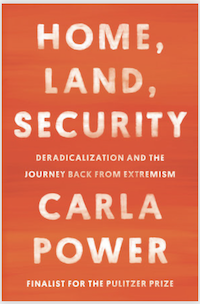 A “provocative and deeply reported look into the emerging field of deradicalization” (Esquire), told through the stories of former militants and the people working to bring them back into society, from National Book Award and Pulitzer Prize finalist Carla Power

What are the roots of radicalism? Journalist Carla Power came to this question well before the January 6, 2021, attack in Washington, D.C., turned our country’s attention to the problem of domestic radicalization. Her entry point was a different wave of radical panic—the way populists and pundits encouraged us to see the young people who joined ISIS or other terrorist organizations as simple monsters. Power wanted to chip away at the stereotypes by focusing not on what these young people had done but why: What drew them into militancy? What visions of the world—of home, of land, of security for themselves and the people they loved—shifted their thinking toward radical beliefs? And what visions of the world might bring them back to society?

Power begins her journey by talking to the mothers of young men who’d joined ISIS in the UK and Canada; from there, she travels around the world in search of societies that are finding new and innovative ways to rehabilitate former extremists. We meet an American judge who has staked his career on finding new ways to handle terrorist suspects, a Pakistani woman running a game-changing school for former child soldiers, a radicalized Somali American who learns through literature to see beyond his Manichean beliefs, and a former neo-Nazi who now helps disarm white supremacists. Along the way Power gleans lessons that get her closer to answering the true question at the heart of her pursuit: Can we find a way to live together?

An eye-opening, page-turning investigation, Home, Land, Security speaks to the rise of division and radicalization in all forms, both at home and abroad. In this richly reported and deeply human account, Carla Power offers new ways to overcome the rising tides of extremism, one human at a time.

1. The WHO endorsed the world’s first vaccine for THIS disease that kills more than 400,000 people a year, mostly in the Global South, including about 260,000 children under age 5, in a move the WHO Director called a “historic moment.” [#WACquiz]

2. The Organization for Economic Cooperation and Development announced THIS “landmark deal” agreed to by 136 nations and jurisdictions, more than 90% of global GDP, that will “reallocate more than $125 billion of profits from around 100 of the world’s largest and most profitable MNEs to countries worldwide.”

3. The 2021 Nobel Peace Prize went to THESE two journalists who exemplified courage in the face of physical threats from repressive governments – Vladimir Putin in Russia and Rodrigo Duterte in the Philippines. [#WACquiz]

4. Dr. Abdul Qadeerf (“AQ”) Khan has died. He was renowned in THIS country as the father of the nuclear bomb that made it the first Islamic nuclear weapon state. Khan was also known for his efforts to export nuclear weapon technology to North Korea and Iran. [#WACquiz]

5. President Tsai Ing-wen, speaking from THIS capital city on Taiwan National Day, pushed back against China’s recent provocative military activities claiming the island nation would not bow to pressure from Beijing. [#WACquiz]

6. North Korea has signaled it may end its two years of relative isolation with measures in the offing including all of THESE EXCEPT. [WACA WWNU]

A. Resumption of a hotline to manage strains
B. Talks to officially end the Korean War
C. Moratorium on nuclear weapons testing
D. Summit between North and South Korean leaders

7. The global outage of Facebook, Instagram and THIS important communications App last week caused significant interruptions in the Global South. THIS App is relied upon in many countries to deliver education, healthcare and government services. [#WACquiz]

8. Ongoing protests in Uttar Pradesh in THIS country were marked by violence when a car, driven by the son of a federal minister, ran over and killed four people protesting controversial farm laws. [#WACquiz]

9. An investigation released this week said more than 200,000 children, mostly boys 13-15 years old, were sexually abused by clergy in THIS country. The report said, “the Catholic Church’s immediate reaction was to protect itself as an institution and it has shown complete, even cruel, indifference to those having suffered abuse.” [#WACquiz]

10. Colombia launched a military unit of 14,000 personnel to deploy to the border region with THIS country, in response to armed groups, terrorism and drug trafficking, aided by THIS country according to Bogota. Colombia has given Temporary Protective Status to about two million refugees from THIS country. [#WACquiz]