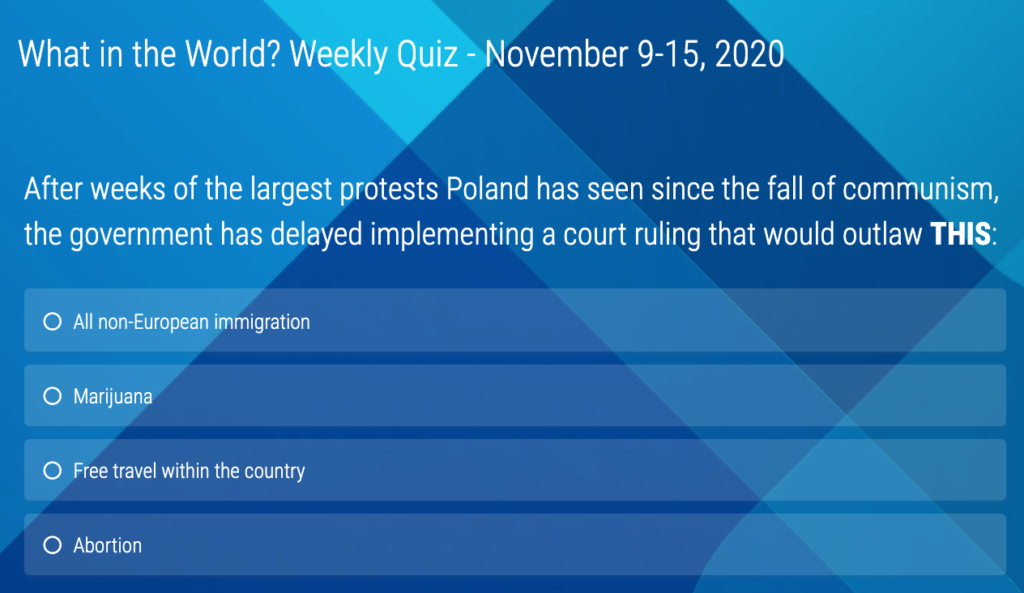 Thanks to quiz master Professor Deborah Barnard, Tennessee Tech U. for this week’s quiz.

WELL DONE!
Another big week for quiz winners!
It was a “Yikes” week for Judy in Texas. Shobha in New South Wales, Australia thought the questions were “interesting” while Himanshu in Nashville thought they were “difficult.” Herb in New Mexico, our October quiz prize winner, called the quiz an “unusual but fun one.” And our veteran quiz taker from Nashville, Yezzie said she loved it!
Thanks to all who are curious about the world every week.  Good luck this week. 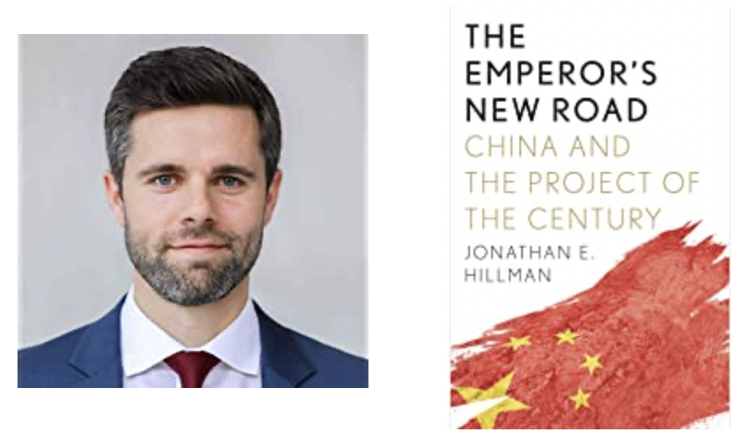 1. International election observers are deployed around the United States by THIS ORGANIZATION to “assess the extent to which elections respect fundamental freedoms and are characterized by equality, universality, political pluralism, confidence, transparency and accountability.” IT is a “security-oriented intergovernmental organization made up of 57 nations, including the United States.”

A. North Atlantic Treaty Organization
B. Organization for Security and Cooperation in Europe
C. The G-57
D. Organisation for Economic Co-operation and Development

2. France continued to grapple with the aftermath of several murders apparently at the hands of Islamic-extremists incensed by a teacher’s use of cartoons depicting the Prophet Muhammad. THIS country in particular drew criticism from President Macron over its President’s response to the episode along with what Macron called its “bellicose attitude towards its NATO allies.”

3. The U.S. Ambassador to Portugal recently said it was time for Lisbon to choose between its “friends and allies, and China.” The comment reflected growing concern about China’s courtship of this NATO ally. Of particular concern to Washington is access to the Lajes Airbase on THIS Atlantic archipelago.

4. The International Atomic Energy Agency, which oversees Iran’s compliance with the JCPOA, the Iran nuclear deal, confirmed last week it was doing THIS.

A. Building a new underground centrifuge facility to produce fissile material.
B. Removing IAEA monitoring cameras from nuclear research facilities.
C. Preventing inspectors from exercising free access to listed nuclear sites.
D. None of the above

5. An event last week at the U.S. Institute of Peace highlighted the 20th anniversary of THIS ACTION which “represented the first time that THIS BODY had addressed the disproportionate and unique impact of armed conflict on women and girls. “IT” also recognized the critical role women can, and do, play in peacebuilding.”

A. UN Security Council Resolution 1325
B. Amendment to the W.H.O. charter
C. United States Congress Resolution during the Year of Women
D. President Clinton’s Executive Order 15261 on “Women and Peacebuilding”

6. Two same-sex couples were married in a mass ceremony hosted by the military in THIS PLACE, highlighting the fact that it is the only place in Asia to have legalized gay marriage.

7. The Philippines, which is struggling with COVID-19 consequences, was struck by THIS SUPER TYPHOON packing 195 mph winds on Sunday. Two million people were in the path of THIS storm which is estimated to have destroyed 22,000 homes and left 125 cities and towns without electricity.

8. The conspiracy theories being circulated by Qanon may have been boosted by THIS country via Twitter as early as November 2017.

9. The Trump Administration lifted restrictions in place since the 1970s on U.S. taxpayer funded aid for scientific research in THIS place. The Prime Minister there said, “This is an important victory against all those who seek to delegitimize everything [THERE] beyond the 1967 lines.” Meanwhile, some criticized the move as wooing 2020 voters who back that nation.

10. Legendary actor Sean Connery who was made famous by the role he played as James Bond passed away last week. When he was knighted by Queen Elizabeth he had the name of THIS native land tattooed on his arm, “[THIS] forever.”