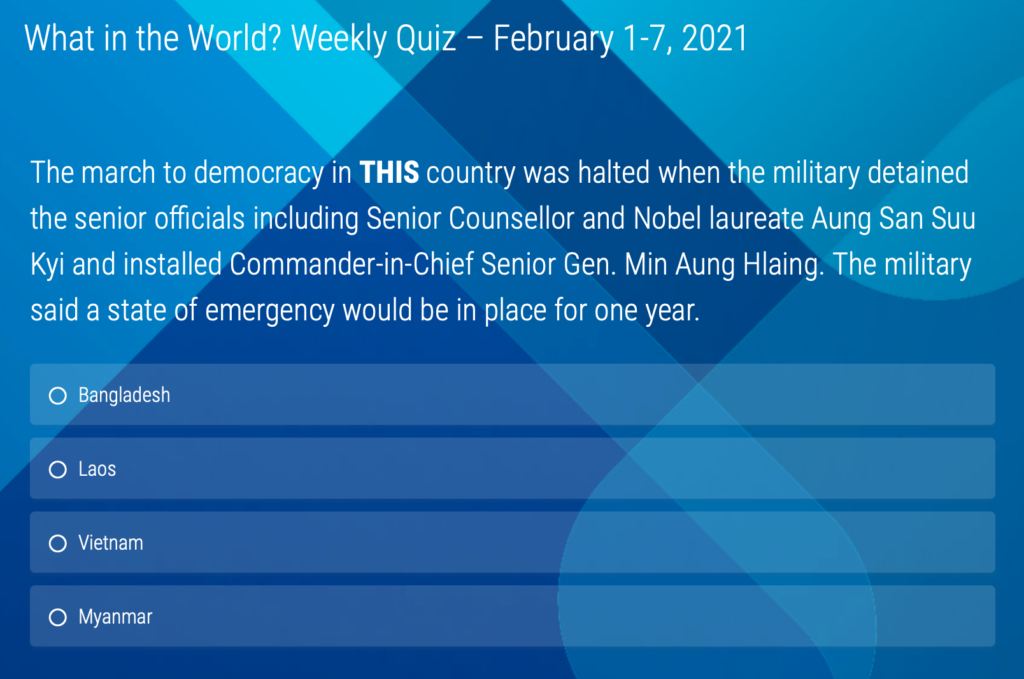 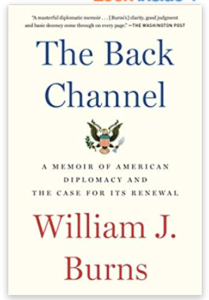 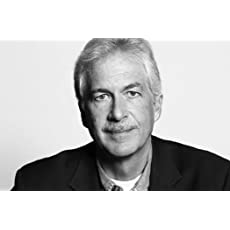 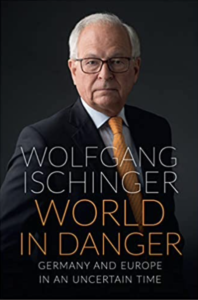 1. Russians took to the streets in over 90 cities on January 23rd braving temperatures as low as -50 degrees below zero, in protest of the jailing of an opposition leader. Over 3,500 were arrested. All of these statements about the protests are true EXCEPT.

A. The Kremlin announced there were only a “few” protesters.
B. Opposition leader Alexei Navalny was released from a Moscow prison.
C. Poland called for more EU sanctions on Russia
D. Putin’s spokesman charged the U.S. Embassy in Moscow with provoking demonstrations.

2. President Biden signed a letter on his first day in office to the UN Secretary General signaling America’s rejoining of THIS agreement that bound over 200 countries to global goals combatting an existential threat.

Correct Response: B. The Paris Climate Accord
https://thehill.com/changing-america/sustainability/climate-change/535474-what-rejoining-the-paris-climate-accord-means

3. Joining a list of world leaders who have contracted COVID-19 including Macron, Johnson and Bolsonaro was THIS President of Mexico who announced January 24th he was positive for the virus.

4. A twin-bombing attack in Baghdad killed 23 and wounded 100 and is believed to be the work of THIS group that was suppressed by a U.S.-led coalition. The group may have launched the attack, first in three years in Iraq’s capital, to “prove its existence.” [“Daily Chatter” Question of the Week]

5. COVID-19 brought about a reduction in demonstrations recorded worldwide by about 70% but campaigns “roared back” according to a USIP report. Despite COVID there was an overall increase of 80% of protest movements in 2020. WHICH is most true? [USIP Question of the Week]

A. Racial injustice and police brutality protests brought 15 million Americans to the streets.
B. Indian farmers blocked highways and railroads to oppose overhauling farm prices.
C. Belarusian protestors launched a campaign demanding ouster of their president over election fraud.
D. All of the above

Correct Response: D. All of the above
https://www.usip.org/publications/2021/01/2021-will-see-more-global-protest-can-it-remain-peaceful

6. The Chinese Foreign Ministry complained about U.S. Navy “freedom of navigation” operations in the South China Sea in areas claimed by Beijing. Parts of the strategic waterway are claimed by numerous nations that border it including all of these nations EXCEPT.

7. Tensions between China and THIS country erupted again on January 20th as a patrol crossed the border into the Sikkim region. The “brawl” was said to be a minor incident but was a reminder of friction between these powers evidenced by fighting last June that left 20 soldiers dead.

8. Officials from THIS government denied rumors that the 2020 Olympic Games, rescheduled for this summer, that a decision has been reached to cancel them despite being hard hit with COVID-19.

9. A new report from Leeds University scientists on global ice melting said the melt rate is now 57 percent faster than 30 years ago. They noted that ice loss from THIS source accounted for 22 percent of the annual total although IT accounts for only 1 percent of all global ice sources.

A. Mountain glaciers
B. North Pole ice pack
C. Antarctic floating icebergs
D. None of the above

10. The U.S. State Department issued a statement of “rock solid commitment” for THIS state following several days of provocative flights including 15 warplanes on Friday that entered an air defense zone. The flights, intended to intimidate, are seen as a test of Biden Administration policy in the region.