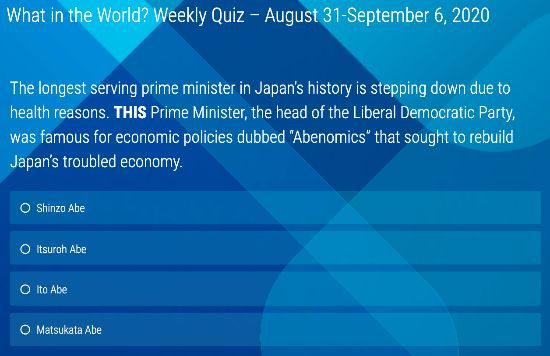 1.  A German air ambulance evacuated THIS gravely ill activist and political opponent of Russian President Vladimir Putin, to Berlin after he was stricken on a flight to Moscow. HIS aides claim he was poisoned before boarding the plane. HE has been active in exposing corruption among high level individuals and in organizing protests.

2. Secretary of State Mike Pompeo went to the United Nations Friday to trigger “snapback” sanctions on Iran, including a controversial arms embargo, but 13 of 15 Security Council members, including France, Germany and Britain rejected the move. The U.S. action was based on Washington being a member of THIS 2015 agreement, but opponents claim President Trump’s withdrawal makes U.S. intervention invalid.

3.  The Special Tribunal for Lebanon found Salim Ayyash, a mid-level official of THIS organization, guilty in the assassination of former Prime Minister Rafik Hariri. He had been pushing for Syrian forces to leave Lebanese territory when he was killed in a bomb attack in 2005 in Beirut. Hassan Nasrallah, leader of THIS group, is believed to have ordered the attack and he is resisting the handover of Ayyash.

4.  Port officials around the world are scrambling to identify and move or make safe large stockpiles of THIS chemical used for fertilizer and explosives, that was blamed for the blast in Beirut this month that killed over 180 and decimated wide areas of the port and city.

5.  The United Arab Emirates is talking with the Trump Administration about acquisition of THIS weapon system as a benefit of its “normalization of relations” agreement with Israel, despite Israeli objections to the sale.

6.  Secretary of State Mike Pompeo said last week, “The Chinese Communist Party chose to crush the freedoms and autonomy of the people of Hong Kong,” in justifying termination or suspension of three bilateral agreements with Hong Kong that included THESE provisions.

7.  President Trump said he expected THIS country to follow the UAE in normalizing diplomatic relations with Israel. The response, in a statement from Prince Turki al-Faisal, was that the Kingdom’s position regarding relations with Israel remained the Arab Peace Plan it offered years ago, calling for a sovereign Palestinian state with Jerusalem as its capital.

8. American diplomats will talk with parties to the crisis in THIS Eastern European country including opposition candidate Sviatlana Tsikhanouskaya who fled to Lithuania following post-election demonstrations. The vote to continue the rule of Alexander Lukashenko was considered, by protestors who drew a violent crackdown from the government in Minsk, to be rigged

9. The MV Wakashio struck a coral reef off the coast of THIS idyllic Indian Ocean island spilling oil across pristine waters and fragile coral reefs according to Reuters. The Wakashio was said to have diverted more than 55 miles from a regular shipping lane. A maritime analysis firm official said, “It was on a very bad trajectory.”

10.  Mei Xiang, representing China in Washington, D.C., made history on Friday when THIS happened.

A.  She became the first woman to be posted in the United States as the Ambassador of the People’s Republic of China.
B.  She arrived in the U.S. to become part of the first US-China astronaut team designated to fly on the Space-X Dragon to the International Space Station
C.  She requested political asylum during a meeting at the State Department
D.  She became the oldest great panda to give birth at the National Zoo.