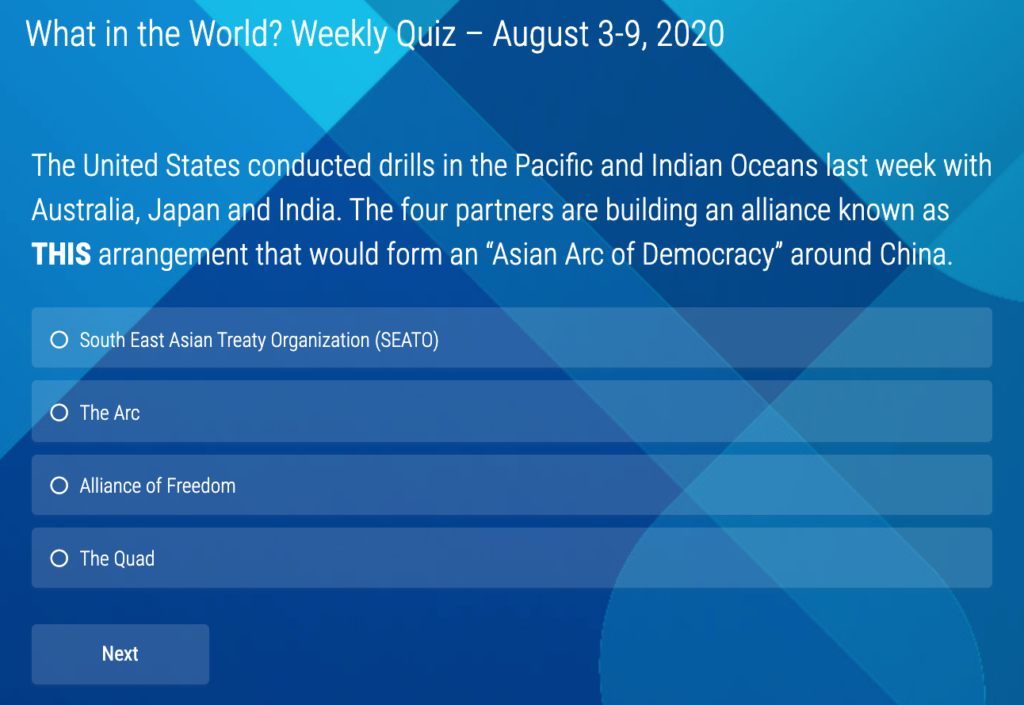 2. THIS group reached agreement on a major stimulus plan, over $2 trillion, to be raised from grants and loans. The funds will be distributed among members with 30% of the fund committed to combat climate change.

4. The United States announced a $5 million reward for the arrest or conviction of the justice minister of THIS country. The U.S. previously offered a reward of $15 million for the arrest of the president for “narco-terrorism.”

5. The Iranian Revolutionary Guard Navy has constructed a mock aircraft carrier, a replica of an American Nimitz class ship, that will likely be used for training naval forces for attacks on the U.S. Navy which has maintained a continuous carrier presence in the region. On Sunday the faux carrier was seen under tow from its base at Bandar Abbas toward THIS strategic chokepoint connecting the Persian Gulf to the Gulf of Oman.

6. The justice minister in THIS country that recently re-elected far-right wing Andrzej Duda to a new five-year term as president, announced the nation intended to leave the European treaty on violence against women starting on July 27th. Zbigniew Ziobro said the treaty was “harmful” because it required schools to teach about gender according to the BBC.

7. The Gulbenkian Prize for Humanity went to THIS 17-year old climate activist who was the 2019 Time Person of the Year. She donated $114,000 from her prize to SOS Amazonia, an environmental organization and $114,000 to the Stop Ecocide Foundation.

8. The Governor of the place set for the 2020 Olympics, delayed to 2021, said the games “can become a symbol of how the world has united to overcome the hardship and how humanity has strengthened its bonds.” When asked about the prospects for the games she said, “First of all, we have to win the victory against the coronavirus.” Who is the host of the 2020 games?

9. Canada’s federal court released THIS ruling on July 22 regarding relations with the United States.

A. The United States was not “safe” for asylum seekers.
B. The U.S.-Mexico-Canada Trade Agreement was unconstitutional.
C. The Canadian government was not required to comply with a 1892 “Fisheries Agreement.”
D. Canadian authorities could not legally prohibit the Toronto Blue Jays from hosting American MLB teams.

Correct Response: A. The United States was not “safe” for asylum seekers.
https://www.bbc.com/news/world-us-canada-53494561

10. The Trump Administration has opened the door for U.S. defense contractors to sell THESE systems to foreign governments. The U.S. versions include “Reapers” and “Global Hawks” and the sale had been restricted by the Missile Technology Control Regime.