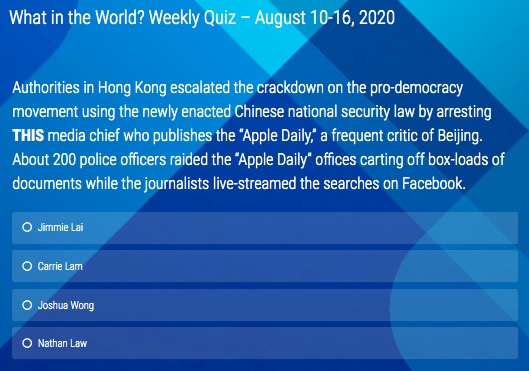 Judy from Houston, thanks for your feedback. We like hearing “Great questions.” Stephen in Mass, yes, the “quiz IS fun,” especially when you’re a winner (if you become a member you’re eligible for the monthly prize!). Connie in Illinois, if last week was a “bad week for |your| brain,” maybe this week will be better. Good quiz luck, all!

Chip from Savannah’s Council, thanks for the feedback. We appreciate knowing the “What in the World?” Weekly Quiz is “intellectually stimulating” for your members in this era of more time spent at home.

1. The United States conducted drills in the Pacific and Indian Oceans last week with Australia, Japan and India. The four partners are building an alliance known as THIS arrangement that would form an “Asian Arc of Democracy” around China.

2. U.S. officials have been concerned about personal data being handled by Byte-Dance, the Chinese firm that owns the popular App TikTok. President Trump has given Byte-Dance 45 days to conclude a sale of TikTok to THIS American corporation.

4. House Foreign Affairs Committee Chairman Eliot Engel demanded an explanation in a letter to U.S. Ambassador to Brazil Todd Chapman about reports in Brazil that he pressured the government to do a “favor” to aid the reelection of President Trump. A Brazilian congressman told the New York Times that Chapman had conversations about the “electoral calendar during a recent meeting the two had about” THIS matter.

A. Reduction of soybean exports to China, to increase demand from the U.S.
B. A crackdown on Amazon rainforest burning by miners and loggers.
C. Tariff reductions on ethanol, a major export of Iowa.
D. Accept increases in imports of U.S. petroleum.

5. The Gamaleya Institute announced it would have a COVID-19 vaccine ready for approval by August 10th and there are plans to vaccinate the population in October. The Institute is in THIS country.

6. The Chinese Ambassador to the United Kingdom warned Beijing would invalidate THIS saying, “If you do not want to be a partner and our friend, and you want to treat China as a hostile power, you will pay the price.”

A. British passports held by Hong Kong citizens enabling up to three million Hong Kongers to move to the UK.
B. The 1997 treaty between the UK and China calling for Hong Kong to be treated as an autonomous region until 2047.
C. Special trade authority allowing the UK to enjoy tariff free trade with Hong Kong.
D. Special residential status for British business people living and working in Hong Kong.

Correct Response: A. British passports held by Hong Kong citizens enabling up to three million Hong Kongers to move to the UK.
https://www.businessinsider.com/hong-kong-china-threatens-to-stop-recognizing-uk-issued-passports-2020-7

7. Iran’s supreme leader told his country on Friday in a televised holiday address that Iran would expand its nuclear program and that it would not negotiated with the United States. He said negotiations would only boost President Trumps reelection chances, “This old man who is in charge in America apparently used negotiations with North Korea as propaganda.” Who is Iran’s supreme leader.

9. Authorities in THIS neighbor of the Russian Federation detained 33 people believed to be fighters from a shadowy paramilitary contractor connected to Putin confidante and oligarch Yevgeny Prigozhin. The state-run news agency Belta reported they were suspected of terrorism to destabilize THIS country ahead of August 9th presidential election that will see President Alexander Lukashenko in his sixth reelection campaign.

10. The head of Space-X, Elon Musk, recently Tweeted support for a theory that THIS ancient site was built by aliens. A minister from that country invited Musk to visit to see evidence they were man-made.

A. Machu Picchu in Peru
B. Pyramids in Egypt
C. Chichen Itza in Mexico
D. Ephesus in Turkey