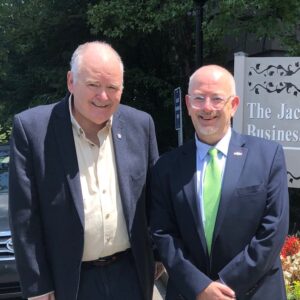 Consul General of Mexico Javier Díaz de León, based in Atlanta, talked with TNWAC’s Patrick Ryan about the economic impact of US-Mexico trade and investment on Tennessee; the USMCA accord on its one-year anniversary and other aspects of commercial relations. They talked about other aspects of the relationship such as the US-Mexico border and migration issues and the shared values and interests of Mexicans and Americans. Also listen to his conversation with the International Business Council last year (Here).

Consul General, Javier Díaz de León, holds a Bachelors degree in International Relations from the Universidad Iberoamericana. He has a Masters in International Conflict Analysis granted by the University of Kent, in England.
Diaz has been a member of the Mexican Foreign Service since 1991 and has held the rank of Ambassador since April 28, 2017. During his diplomatic career he has held various positions, including: Deputy Consul General in San Diego; Deputy Consul General in New York, Head of the Office of Migratory and Hispanic Affairs in the Embassy of Mexico in the United States and Executive Director of the Institute of Mexicans Abroad of the Ministry of Foreign Affairs in Mexico City.