What’s Ahead in the U.S.-Russia Relationship After the Biden-Putin Summit

When United States President Joe Biden and Russian Federation President Vladimir Putin met in Geneva on June 16th there was an icy cast on prospects for positive results. Yet, Biden said he did what he came to do. That seemed to have been to put Putin on notice concerning: cyber-attacks on American systems; human rights and suppression of Russian opposition; provocative military moves against neighbors like Ukraine; and observance of international norms of behavior. 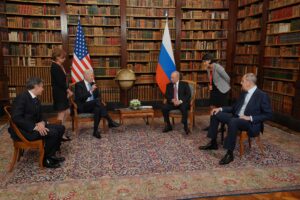 Going into the summit, the U.S. and Russia were deeply at odds over these and other sources of conflict. Beyond the leaders’ press conferences and officials’ talk show appearances there’s much more to dissect and understand on what the Washington-Moscow relationship is going to look like.

Dr. Korobkov is Professor and Director of Russian Studies in the Department of Political Science and International Relations, Middle Tennessee State University. He focuses his scholarship on post-Soviet Russia and Eastern Europe. Dr. Katz is a Professor in the Schor School of Policy and Government at George Mason University. He has lectured and written extensively on Moscow’s foreign policy. Korobkov and Katz will drill down into the summit outcomes and discuss the path ahead for the conflict-ridden relationship. And they will welcome you into the conversation.

The Global Dialogue on U.S.-Russia relations will be moderated by LCDR Patrick Ryan, USN(Ret), founding President of the Tennessee World Affairs Council and a former intelligence officer.

The TNWAC Global Dialogue is free and open to the public. Registration is available at the TNWAC.org web site and at the link here

The Tennessee World Affairs Council is a nonprofit, nonpartisan educational association that promotes international awareness, understanding and connections to enhance the region’s global stature and to prepare Tennesseans to thrive in our increasingly complex and connected world. To join, make a gift or for more information visit www.TNWAC.org or call: (931)261-2353 or email: pat@tnwac.org

THE PRESIDENT:  It’s been a long day for you all.  (Laughs.)  I know it was easy getting into the — the pre-meeting.  There was no problem getting through those doors, was it — was there?

Anyway, hello, everyone.  Well, I’ve just finished the — the last meeting of this week’s long trip, the U.S.-Russian Summit.

And I know there were a lot of hype around this meeting, but it’s pretty straightforward to me — the meeting.  One, there is no substitute, as those of you who have covered me for a while know, for a face-to-face dialogue between leaders.  None.  And President Putin and I had a — share a unique responsibility to manage the relationship between two powerful and proud countries — a relationship that has to be stable and predictable.  And it should be able to — we should be able to cooperate where it’s in our mutual interests.

And where we have differences, I wanted President Putin to understand why I say what I say and why I do what I do, and how we’ll respond to specific kinds of actions that harm America’s interests.

Now, I told President Putin my agenda is not against Russia or anyone else; it’s for the American people: fighting COVID-19; rebuilding our economy; reestablishing our relationships around the world with our allies and friends; and protecting our people.  That’s my responsibility as President.

I also told him that no President of the United States could keep faith with the American people if they did not speak out to defend our democratic values, to stand up for the universal rights and fundamental freedoms that all men and women have, in our view.  That’s just part of the DNA of our country.

So, human rights is going to always be on the table, I told him.  It’s not about just going after Russia when they violate human rights; it’s about who we are.  How could I be the President of the United States of America and not speak out against the violation of human rights?

I told him that, unlike other countries, including Russia, we’re uniquely a product of an idea.  You’ve heard me say this before, again and again, but I’m going to keep saying it.  What’s that idea?  We don’t derive our rights from the government; we possess them because we’re born — period.  And we yield them to a government.