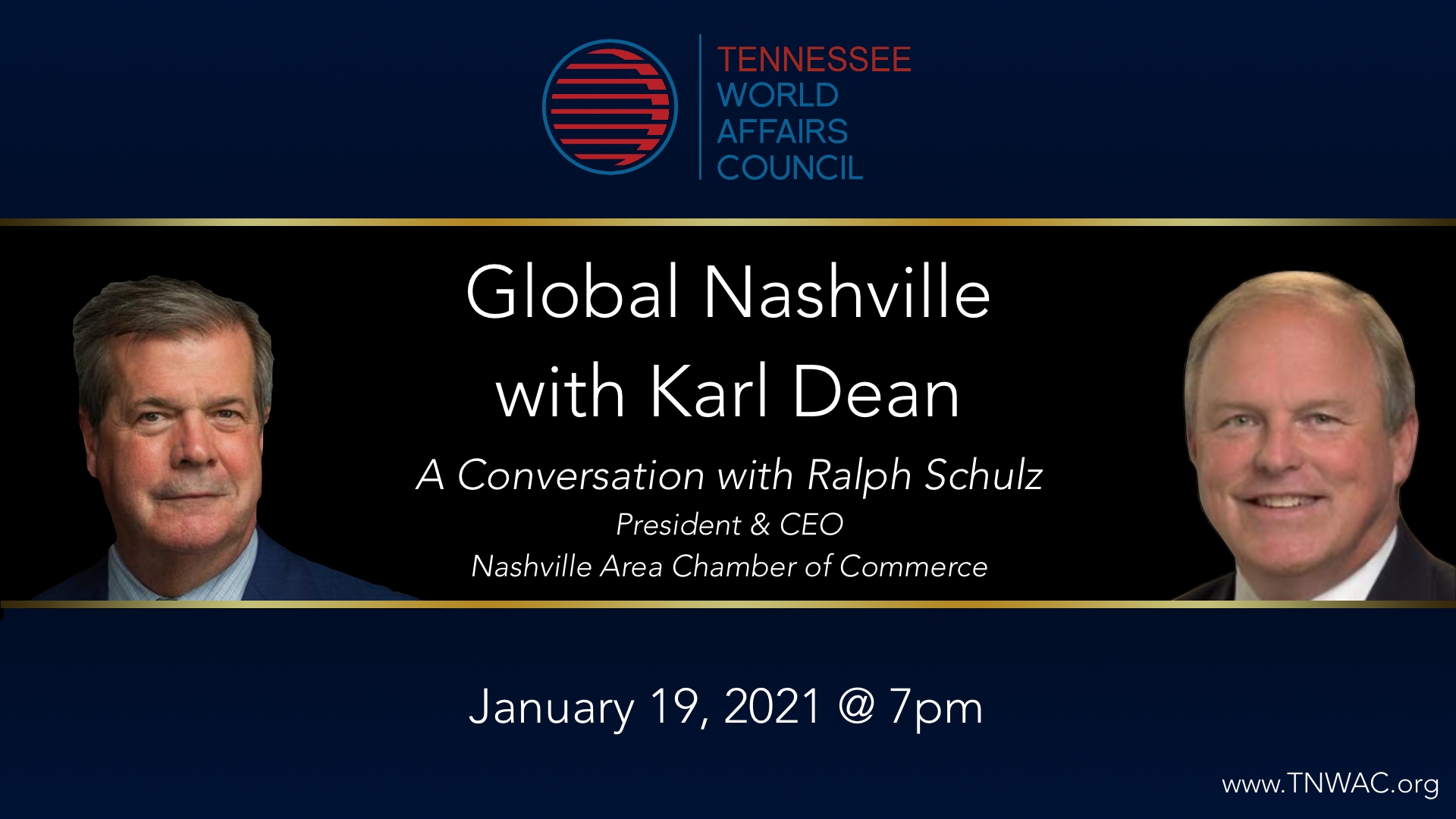 There’s no shortage of issues impacting Nashville’s and Middle Tennessee’s well-being. On Tuesday evening, January 19th former Nashville Mayor Karl Dean will talk with Ralph Schulz, community leader and head of the Nashville Chamber. Join us for this review of important issues affecting you and your neighbors: the impact of the pandemic on business and the economy; the 2nd Avenue bombing aftermath and effects on the hospitality industry and the downtown; effects of new policies in the Biden Administration on immigration, trade and more; the situation for small businesses shuttered or in hibernation as a result of COVID; and much more.

Ralph Schulz was named president and CEO of the Nashville Area Chamber of Commerceby the Chamber’s board of directors in November 2006, following a 30-year career in nonprofit management, marketing and fundraising. In taking the position, he accepted a leadership role at one of Middle Tennessee’s oldest and largest business federations, an organization dating back to its founding in 1847.

During his tenure, the Chamber has played a key role in helping the region emerge from the 2007 recession to a period of unprecedented growth with a business relocation and expansion strategy known as Partnership 2020. Additionally, the Nashville Area Chamber of Commerce was the lead organization in the creation of the nationally recognized Nashville Entrepreneur Center and the passage of a public referendum supporting construction of the Music City Center convention facility.

Since Schulz has taken on the role of president and CEO, the Chamber has also led the movement to improve public school performance through the creation of the Academies of Nashville, established the Moving Forward initiative to ensure the creation of a regional transportation solution through a cohesive community effort and developed into a respected publisher of data on the Nashville Metropolitan Statistical Area with the annual publication of the Vital Signs report.

In 2009, the Nashville Area Chamber of Commerce was named “Chamber of the Year” by the American Chamber of Commerce Executives (ACCE), recognizing the Nashville Chamber’s organizational excellence, service to members, development of leaders and volunteers and its impact on key community priorities. The ACCE award referenced the Nashville Chamber’s role in the creation of Nashville for All of Us,a campaign made up of community leaders aligned to defeat a 2009 charter referendum which would have prohibited Nashville city government from conducting business in a language other than English. The Chamber was also praised for its creation of A Leading Edge, a broad range of programs aimed at helping Chamber members navigate the turbulent waters of the recession.